Every two years, a select group of Western fighter manufacturers touch down at Farnborough air show to promote their wares in what is perhaps the toughest of all sales categories.

As the home show for Eurofighter partner company BAE Systems, the event offers a prime opportunity to highlight the credentials of the Typhoon, as it works with allies Airbus Defence & Space and Finmeccanica’s Alenia Aermacchi to add to their operators list. Austria, Germany, Italy, Saudi Arabia, Spain and the UK have together received more than a combined 400 examples so far, and Oman is under contract to field 12 of the type from later this decade.

The Eurofighter consortium is promoting a self-claimed “paradigm shift” in capability for the Typhoon, with its justification being a range of system enhancements which now allow swing-role missions to be flown.

Test flights have also been conducted carrying MBDA Storm Shadow and Taurus Systems KEPD 350 cruise missiles, and BAE is studying the accelerated integration of MBDA’s Brimstone 2 air-to-surface missile for the UK Ministry of Defence. Windtunnel tests have been performed with conformal fuel tank shapes, and an aerodynamic modification kit is to sharpen subsonic turn performance.

Such sweeteners are required to keep the Eurofighter at the top table in current and near-term contests – as is the addition of an active electronically-scanned array (AESA) radar. BAE is expected to bring instrumented production aircraft 5 to Farnborough, with the development asset having entered flight testing with the new Euroradar-developed Captor-E sensor in its nose. However, a production contract to add the technology to Tranche 3 aircraft is not yet ready to be signed, with the step requiring parliamentary sign-off in Germany, Italy, Spain and the UK.

Saab displayed a similar AESA enhancement – the Selex ES Raven ES-05 – for its Gripen at the 2012 Farnborough show, but will this time be exhibiting the type as a full-scale replica only. This is because the aircraft it brought to the UK last time – development asset 39-7 – is involved in flight testing in Sweden to support the delivery of its E-model version of the type from 2018. An anticipated deal to supply 22 examples to Switzerland was foiled by a public referendum in May, but Sweden will get at least 60 new-build examples, and discussions are progressing with Brazil, which selected it last December. Signing the latter deal for an expected 36 aircraft is being targeted before the end of this year.

Other European types being represented at a corporate level include the Dassault Rafale – selected in India but still yet to be the subject of a firm export contract – and the RAC MiG-29/35 and Sukhoi Su-30/35; the latter pair under the umbrella of Russia’s United Aircraft Corporation (UAC). UAC can also speak for the Sukhoi PAK-FA/T-50 now being developed for the Russian air force. A recent incident saw the programme’s fifth prototype sustain significant damage in a fire, but UAC says deliveries will begin as planned in 2016. A development of the type is also expected to enter Indian air force service under a bilateral development project. 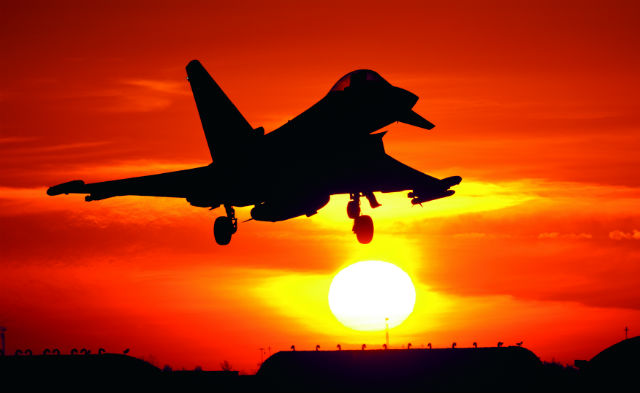 With production of its C-17 strategic transport to end next year, Boeing is pulling out all the stops in a bid to prevent its F/A-18E/F Super Hornet from suffering the same fate by the third quarter of 2016.

The drawn-out process to approve the US Department of Defense’s fiscal year 2015 budget could extend this by around six months with the possible addition of 12 more EA-18G Growlers, but new export business to follow the combined sale of 24 F-model Super Hornets and 12 EA-18Gs to Australia must be added fast to sustain the St Louis line in Missouri for any significantly longer period. A current orderbook from Saudi Arabia for the company’s F-15 means that product line will remain “rock solid” until at least 2018, Boeing Defense, Space & Security chief executive Chris Chadwick said recently – but after its defeat by the F-35 in South Korea, it is uncertain where a further sale of the type could be made.

For the first time at a major air show, the likes of Boeing, Eurofighter and Saab have a new contender challenging them inside the wire, with the planned display participation of the short take-off and vertical landing F-35B. Rival manufacturers once spoke of delays to the Joint Strike Fighter as having created a window of opportunity for their products, but with the type now only one year away from its initial operational capability objective with the US Marine Corps, this opening could in reality be barely ajar today.

Of its eight international programme partners, Australia, Italy, the Netherlands, Norway, Turkey and the UK have all either received or ordered their first F-35s, and while some look set to buy fewer than originally planned, crucially, they have not gone elsewhere. Canada and Denmark have yet to put pen to paper, but some industry sources remain sceptical about suggestions that they could stage competitions which are not in reality weighted towards a selection of the Lockheed type. Eurofighter, for example, has responded to a capability questionnaire from Ottawa, but does not know whether a firm requirement could yet mandate a single-engined, “fifth-generation” solution.

Starting what will eventually become an extensive list of buyers, Israel, Japan and South Korea are also already under contract to introduce the F-35.

Whether by good luck or judgement, Lockheed’s product transition to the new model from the F-16 has overlapped nicely. First flown in prototype form 40 years ago, the Fighting Falcon will remain in production until the third quarter of 2017, with Lockheed having recently delivered Baghdad’s first D-model trainer. More than 4,540 F-16s have been delivered, with 28 nations now operating the type.

Increasingly, the major fighter producers are also facing competition from other players. These include low-cost counter-insurgency (COIN) platforms. The Textron AirLand Scorpion is making its show debut at this year’s Farnborough, and the modified Air Tractor AT-802U has been on display before, and won business. Armed turboprop trainers also have taken more orders in recent years – Embraer’s EMB-314 Super Tucano especially has enjoyed considerable international success – prompting other companies to eye similar adaptations to their products. One European airframer specialising in the elementary and basic trainer sectors is expected to announce a new armed product during the show, sources suggest.

While it is true that armed turboprop and COIN aircraft might only serve a purpose in niche categories – neither would be capable of defending sovereign airspace from a well-equipped adversary – sales of both types have undeniably eroded the potential sales base open to more traditional fighter producers.

Other threats in the coming years will include new pretenders, such as the potential output of indigenous fighter projects from nations including Brazil, India, Japan, South Korea and Turkey. Some current producers will seek to work with the local industry champions on such countries’ projects, rather than trying to beat them head-to-head in the sales arena.

Fighter contests remain slow and complicated procedures, with politics often playing as big a part as operational capability and industrial workshare in the decision process. Even when victory is declared multiple barriers can remain during the march to contract signature. More than two years after gaining L1 vendor status in India, the Dassault-led Rafale team has yet to finalise negotiations for a 126-aircraft deal, and Saab’s “win” in Switzerland turned into a public referendum defeat.

With budgets tight and the lure of the “fifth-generation” new kid on the block drawing many towards the F-35, the likes of Boeing, Dassault, Eurofighter, RAC MiG and Saab will continue to fight hard for whatever sales opportunities remain. The chances are that all of them will be back at Farnborough in two years time, but come the end of the decade, a big question mark hangs over whether all will be able to remain active as manufacturers in the fighter industry.