Sikorsky has unveiled the latest iteration of an armed variant of its ubiquitous Black Hawk helicopter, which it sees as an option for countries looking to replace fleets of Mil Mi-24s.

First displayed last month at the multi-national Anakonda exercise in Poland, the airframer has since added several new capabilities for the Farnborough air show. These include an Infirno electro-optical/infrared turret and DAGR guided rocket, both developed by Sikorsky’s new parent Lockheed Martin.

Based on the export S-70i built by subsidiary PZL Mielec in Poland, it uses the helicopter’s existing stub wings – usually holding auxiliary fuel tanks – to carry the weapons payload.

This configuration also allows unhindered access to the cabin, explains James Katzen, vice-president, director of sales at PZL Mielec, bringing the helicopter closer to the combined attack-transport role of the Mi-24. 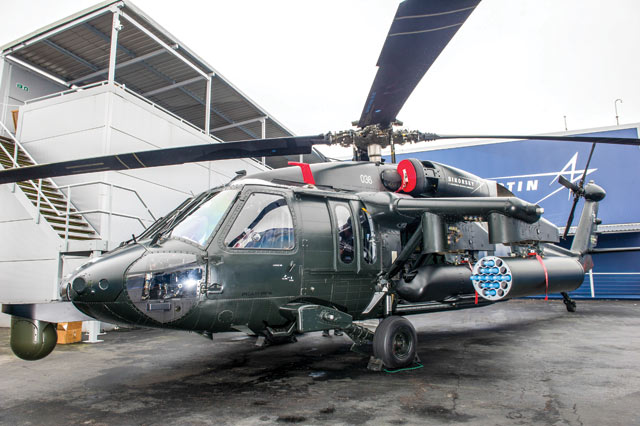 “It creates a new segment for the Black Hawk we have not competed for in years prior. We have also never offered a weaponised platform directly from the factory before.”

Developed over a period of three to four months, Katzen says the variant has benefited from the capabilities and systems available since Sikorsky was acquired in November 2015.

“Sikorsky and Lockheed Martin have known each other for decades on a number of programmes, but this is the first time we are really dusting off and presenting something new to the market,” he says.

One country of particular interest is Mielec’s home nation. Poland is in the process of replacing its Mi-24 fleet, but seems likely to select a pure attack helicopter under its Kruk requirement.

In addition, Warsaw in April 2015 selected the Airbus Helicopters H225M for a 50-unit tri-service order. That contract has yet to be finalised, however, leaving open the possibility that Sikorsky could absorb some or all of that deal if the Polish administration changes tack.

“We are trying to drive awareness that there is another option out there for at least some of the fleet,” says Katzen, who identifies special forces missions as a particular area of opportunity.

Katzen estimates that, if selected, it could begin deliveries in around 12 months.

He also argues that it is important for Poland to select a domestically produced product to aid its export ambitions.

“We are really hoping the Polish government selects the Black Hawk, because it sends a very positive message to other [potential customers] if the country making the Black Hawk buys it,” says Katzen.

“If it really wants to develop its export business then it needs to add at least some of the Black Hawks into its fleet to help promote it.”