Embraer’s developmental KC-390 tanker/transport is due to depart on a multinational demonstration tour in the coming days, following a successful debut at the Farnborough air show.

Speaking on board the jet-powered type, which was parked in the airframer’s static display, Jackson Schneider, chief executive of Embraer’s defence unit, said the KC-390 had attracted substantial interest.

“We have received visits from around 20 international delegations,” he says. “We had several who have requested visits or demonstrations in their own country.

“It is the right airplane for a bunch of nations.” A delegation from Sweden was among the nations who were given a tour of the aircraft. 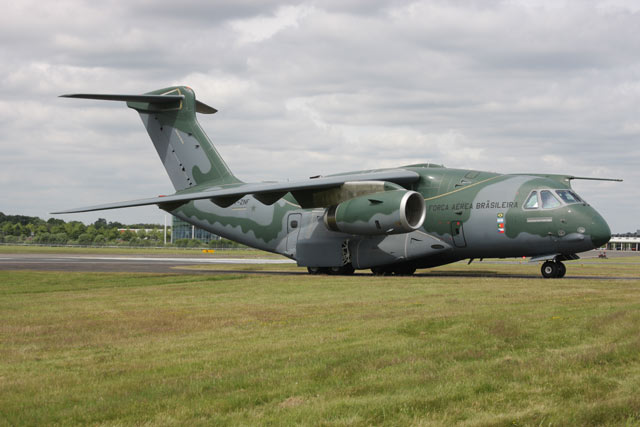 The aircraft on the static line is the company’s initial flight-test prototype (PT-ZNF) which arrived at Farnborough on 7 July following a stop-over at Alverca air base in Portugal where it was presented to the Portuguese air force.

Portugal has signed a letter of intent (LoI) for six examples of the KC-390 as a replacement for its fleet of legacy Lockheed Martin C-130Hs.

Fellow European LoI-holder the Czech Republic will receive a visit from the KC-390, Schneider confirms, when the aircraft departs the UK on 16 July.

He says three other countries are involved in the tour of Europe, the Middle East and North Africa, but declines to be more specific.

Embraer is aiming for certification of the International Aero Engines V2500-powered transport in 2017, ahead of service entry with the Brazilian air force in 2018.