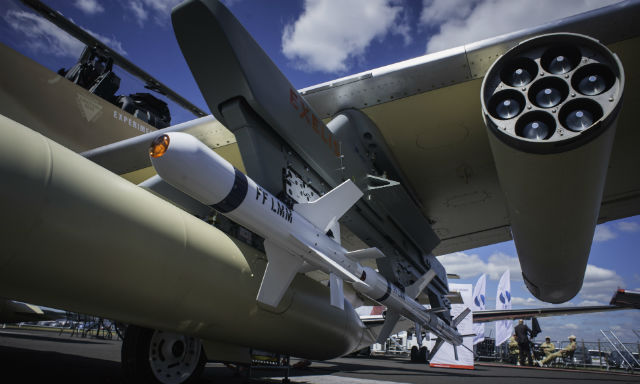 Textron Systems thinks big things can come in small packages and the company has used Farnborough to unveil its newest munition - a 27in (0.7m) precision-guided glide weapon called Fury.

Fury is being developed in conjunction with Thales in the UK and Textron says the weapon can be deployed against a range of targets while providing big savings over self-propelled missiles.

Three Fury bombs can be mounted on a single Hellfire missile rail. After release, the weapons glide to their targets - typically light armoured vehicles, small boats or personnel - using a GPS-aided inertial navigation or semi-active laser systems, he says.

Leimkuehler says the weapon is not intended to replace rival munitions, but instead is designed to complement the existing inventories of the USA and other countries.

He declines to speculate on potential sales but anticipates the programme lasting around two years.

Textron and Thales will share production, with the former contributing the height-of-burst sensor and the electronic safe and arm device. The weapon has already been integrated onto a Shadow M2 unmanned air vehicle manufactured by sister company AAI.