The T2 (D-HDSF) was handed over to the emergency medical services (EMS) operator at a ceremony at Airbus Helicopters' Donauwörth plant on 31 July. 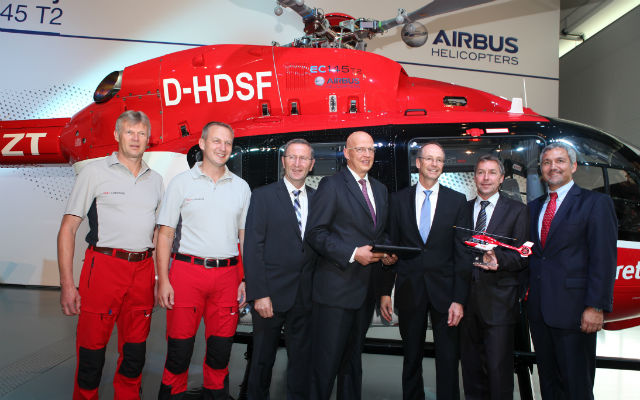 DRF Luftrettung has 20 of the type on order for EMS operations across Germany. The first example will be inducted into its Munich operation by year-end.

Wolfgang Schoder, chief executive of Airbus Helicopters in Germany, says the company is "thrilled" to be delivering the helicopter to "one of its most loyal customers".

Steffen Lutz, a director at DRF, says: "We are proud to be the first operator in the world to take delivery of an EC145 T2."

Airbus Helicopters holds more than 100 orders for the EC145 T2, and anticipates delivering 20 of the rotorcraft this year. This will ramp up to 50 aircraft in 2015, before eventually rising as high as 70 per year.

Deliveries were due to commence at the end of 2013, but programme and certification delays pushed entry into service back six months.

Schoder says: "After six years of development to have a six-month delay is not fantastic, but it is not a huge drama."