Boeing says it has responded to Australia’s request for information (RFI) related to acquiring a replacement for the BAE Systems Hawk 127. 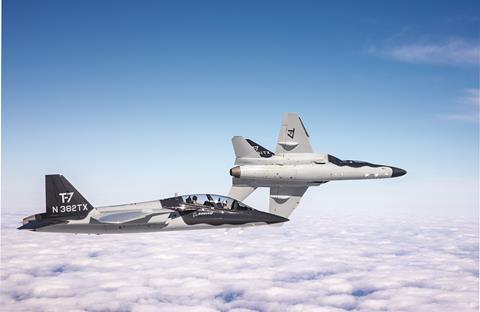 Following the RFI, BAE, Boeing and Leonardo all confirmed that they were interested in the requirement. Korea Aerospace Industries said at the time that it was reviewing the request.

“No other training system in the world today will better develop the skills required to operate the RAAF’s most advanced frontline aircraft like the [Boeing] F/A-18 Super Hornet, EA-18G Growler and the [Lockheed Martin] F-35,” says Chuck Dabundo, vice-president of T-7 programmes at Boeing.

The company adds that the T-7 training system includes the aircraft and ground-based equipment including simulators and debriefing stations.

Boeing also promoted the T-7 at the 2019 Avalon Airshow near Melbourne.

The T-7A Red Hawk emerged victorious in a long-running competition to replace the venerable Northrop T-38 in US Air Force service. The deal will see Boeing provide 351 examples valued at up to $9.2 billion.