A request for information (RFI) for the Air 6002 Phase 1 requirement was issued on 1 June, says the Australian Department of Defence. 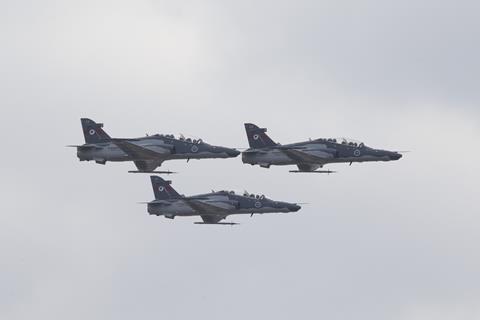 “Defence is yet to fully define the requirements for Air 6002 Phase 1 Future Lead-in Fighter Training System,” it says.

“However, aircraft performance and aircraft mission systems that bridge between the pilot training system and fast jet conversion courses will be critical requirements. The Future Lead-in Fighter Training System will be expected to remain relevant to its role in training fast jet aircrew and supporting joint force training, to be adaptable to those needs as they evolve, to be affordable, and to be safe out to an indicative timeframe of 2050.”

Of major trainer manufacturers, BAE, Boeing and Leonardo all say they are interested in the requirement.

BAE is upbeat about the prospects for its long-running platform. “The Hawk is the world’s most successful and proven military aircraft trainer, built on more than 35 years of experience training pilots for the world’s leading air forces. For more than 20 years, we have worked in partnership with the Royal Australian Air Force to ensure it has the pilots it requires… and we believe Hawk is the proven solution to continue this partnership.”

Boeing plans to pitch its developmental T-7A Red Hawk, having briefed on the jet at the Avalon Airshow in February 2019. “[The] T-7A Red Hawk is an all-new advanced pilot training system designed for the US Air Force training mission, with the flexibility to evolve as technologies, missions and training needs change. It includes trainer aircraft, ground-based training and support – designed together from the start.”

Leonardo says it will offer the M-346, which it claims is the ideal platform for training future pilots of the Lockheed Martin F-35. It notes that the M-346 is operated by Israel, Italy, Poland and Singapore, all of which are current or prospective operators of the Joint Strike Fighter.

“The M-346 training system is cost-effective and state-of-the-art, with the reliability of a fully developed programme, representing a competitive and no-risk solution compared with the alternatives,” says Leonardo.

Korea Aerospace Industries, which produces the T-50 advanced jet trainer, tells FlightGlobal that it is reviewing the RFI.