Dassault chief executive Eric Trappier regrets the breakdown of the UK-France defence partnership that would have seen his company team with BAE Systems on a next-generation unmanned combat air vehicle, saying a “political decision” was behind last year’s launch of the Franco-German Future Combat Air System initiative.

Dassault and BAE began collaborating after the Lancaster House agreement in 2010 between then president Nicolas Sarkozy and prime minister David Cameron. However, following the UK’s vote to leave the EU in 2016, pressure grew for Paris and Berlin to develop an alternative solution. 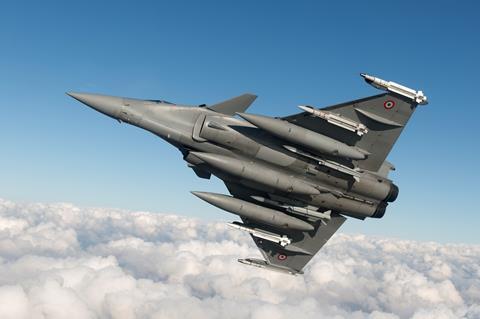 Last year, both governments announced that Dassault and Airbus Defence & Space would lead the initiative, along with companies including MBDA, Safran, Thales, and Indra of Spain, which is also to join the partnership.

Trappier does not rule out an eventual merger between Franco-German efforts and the UK-Italian-Swedish Tempest project, launched at the 2018 Farnborough air show, and a “reaction”, he says, to the decision by France and Germany. However, he admits that “to stop the train [in the short- to medium-term] will be difficult”.

He welcomes January’s formal go-ahead for the Franco-German effort, which had originally been planned for 2018. “It took a certain time to achieve, but what is important is that we now have a concrete contract. It’s now real work.”

Speaking at Dassault’s annual results presentation in Paris on 27 February, Trappier confirmed that the company’s Rafale backlog stands at 75 units, with 47 of these allocated for export customers and 28 for France.

Dassault delivered a total of 26 Rafales in 2019, all for export. Following this spike in activity it expects to hand over 13 examples to international buyers this year, with the next French deliveries to take place between 2022 and 2024.