Qinetiq has completed the process of renewing almost all of its fleet employed by the Empire Test Pilots’ School (ETPS) at Boscombe Down in Wiltshire, with the assets also having been transitioned onto the civil, rather than military aircraft register.

Fourteen aircraft now support the instruction of test pilots and flight-test engineers for the UK and partner nations, and two of these were exhibited in the static display at the Royal International Air Tattoo, staged at RAF Fairford in Gloucestershire from 19-21 July. These were one of a newly fielded pair of Pilatus PC-21 ­turboprops and a unique BAE Systems Avro RJ70, nicknamed the “flying classroom”. 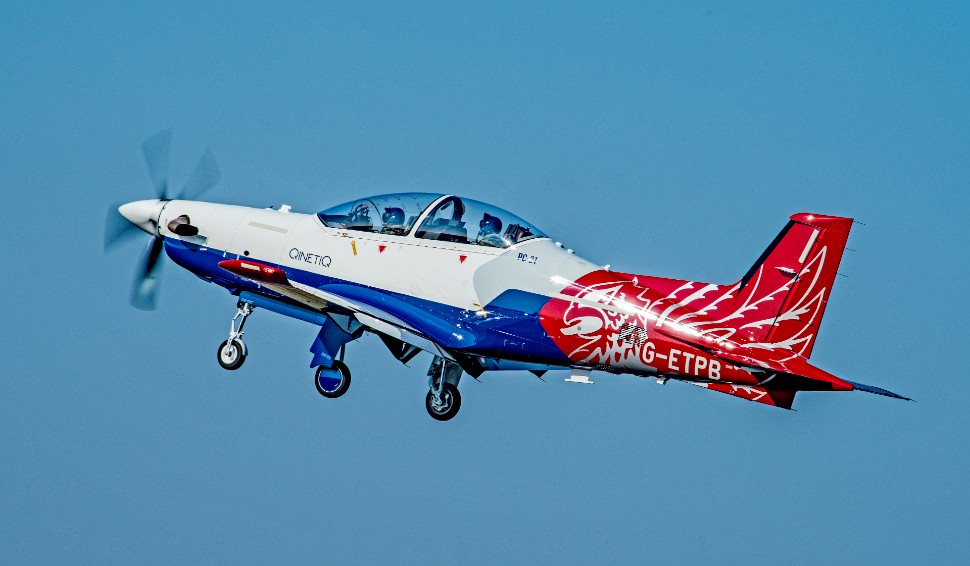 Other fixed-wing aircraft employed by ETPS are two Grob Aircraft G120TPs, one Diamond Aircraft DA42 and an RJ100, while its twin-engined rotary assets include four Airbus Helicopters H125s, two Leonardo AW109s and a leased Bell 412.

The G120TPs, PC-21s and H125s were all received last year, replacing aged BAE Systems Hawk T1, Dassault-Dornier Alpha Jet and Short Tucano trainers, plus Aerospatiale Gazelle rotorcraft. They began supporting course delivery at the start of 2019, and Qinetiq director operations air and space Simon Tate says their introduction has had a major impact.

“We are seeing stellar serviceability, which has made a considerable difference to the school versus the legacy types,” he says. “Availability really isn’t a problem – and for the commitments we currently have, we’re spot on.”

However, the school’s transformation runs much deeper than just the introduction of new aircraft – so much so that Qinetiq heralds the change as “the greatest in its 75-year history”.

“In 2015, Qinetiq and ETPS were challenged by Sir Stephen Hillier to innovate and change the way courses were delivered, and find ways to modernise, maintain relevance and reduce cost,” the company says.

In late June, then-Royal Air Force chief of the air staff Air Chief Marshal Hillier ­returned to Boscombe Down as the updated school was formally reopened.

“We have moved from a 1980s way to a now way of doing it,” Tate says. “It’s not just a case of switching the aircraft – it’s also changing the course modules.” Where stacks of bulky ring ­binders were once required, ­students can now work securely from afar on tablet computers to advance their courses – in one case, doing so from a US Navy aircraft carrier deployed in the Asia-Pacific region.

Updates have included introducing more modularised courses following a major syllabus review and the addition of options such as test pilot refresher training and offering instruction for evaluator aircrew.

ETPS’s training activities have now also been accredited by the European Union Aviation Safety Agency (EASA), a status that Qinetiq hopes will deliver business ­opportunities with a broader range of customers.

Current annual throughput ­includes up to 24 UK Ministry of Defence and international ­students completing a so-called “long course”, for some culminating in a “military delta” phase ­during which they fly a Saab Gripen D in Sweden. But in all, ETPS offers around 130 course modules, across a broad range of disciplines.

Meanwhile, Tate says the volume and ­quality of data now captured during flight activities is also having a transformative effect, thanks to the G120TP, H125 and PC-21 all being equipped with flight-test instrumentation.

“Particularly the PC-21 is ­delivering fantastically well – ­especially the debriefing system,” he says. “You can sit the student down and take the sortie apart in minute detail.”

An instructor can choose the high-performance Pilatus type or turboprop-powered G120TP for an individual sortie, depending on which is better suited for the required manoeuvres. Tate says that as a result, “you are getting the best experience from that aircraft type”. He notes that despite having retired two jet models, “we can do everything we were doing on the Alpha Jet and Hawk on the PC-21”.

Meanwhile, a project to retrofit crashworthy fuel systems with three of its H125s – Airbus Helicopters offered the modification to operators in time for only the school’s last example to be delivered with the feature – is nearing completion, with the last soon to be returned to use.

After the reopening, Hillier – who in late July was succeeded by Air Chief Marshal Mike Wigston – noted: “ETPS is now ready for the future and the next generation of air capability. Relevant, affordable, world class and at the cutting edge of training.”