Saab has launched the next generation of its formidable RBS15 anti-ship missile series for international sale, with a little help from Norse mythology.

Unveiling its latest evolution of the strike weapon at the Farnborough air show, the Swedish manufacturer is offering the product under the "Gungnir" family banner. This name refers to the spear of the god Odin – which was unstoppable and never missed its target, the company says.

While it looks largely identical to the Mk3 version of the RBS15 in current operation, the latest version uses a new, composite airframe and incorporates an advanced radar seeker. The Mk4 Air model will weigh around 650kg (1,430lb), including a roughly 200kg warhead, and offer a sea-skimming range performance of more than 300km (555nm). 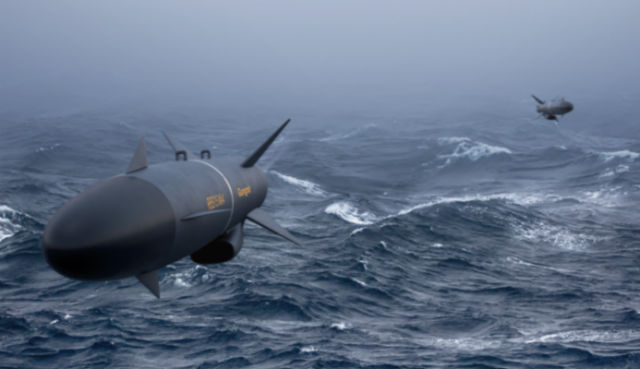 Pointing to the use of new technologies in enhancing ship defences, Svensson notes: "The list of requirements is growing ever longer". Other enhanced features of the Mk4 will include an anti-jam GPS capability and an option for a datalink that would enable an operator to perform dynamic retargeting after launch.

Saab expects the new weapon standard to enter operational service early in the next decade, following firing trials due to start in 2021. It is now offering potential customers the option of acquiring Mk3-model missiles before later updating the newer standard.

The Gungnir family of weapons also will include versions for ship launch, and to equip coastal defence batteries.