India’s Rafales to be inducted on 29 July

The event will mark a major milestone in New Delhi’s torturous path to obtain an advanced Western fighter. 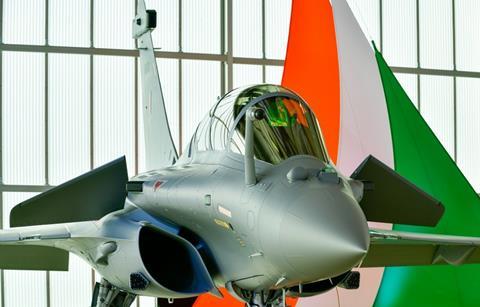 India will receive 36 Rafales from a 2016 order

The nation’s defence ministry says the 29 July induction will be a low-key affair, with no media present. A final, more officious, induction will take place on 20 August, it adds.

“IAF aircrew and ground crew have undergone comprehensive training on the aircraft, including its highly advanced weapons systems and are fully operational now,” says the defence ministry. “Post arrival, efforts will focus on operationalisation of the aircraft at the earliest.”

The five jets are part of a 36-unit deal signed the government of Narendra Modi in 2016. The move came shortly after the cancellation of the long-running Medium Multi-Role Combat Aircraft contest for 126 aircraft.

New Delhi still has a requirement for 110 advanced fighters for its air force, as well as 57 naval fighters.