​JASDF signs up for military pilot training in Italy

Following a technical agreement signed between the Italian air force and the JASDF, Japanese pilots will take part in advanced training courses at the school, says Leonardo, a partner in the venture. 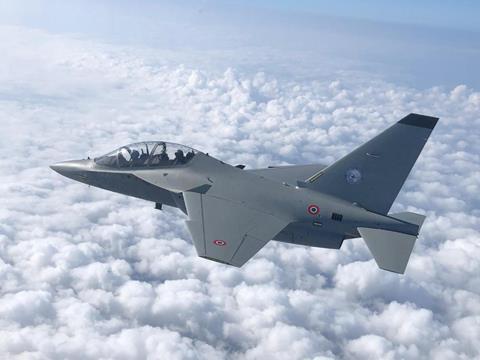 An M-346 sporting the IFTS logo

“I believe that this is a significant step to deepen defence cooperation and exchanges between the Koku-Jieitai (Japan Air Self-Defense Force) and Italian air force.”

The school’s other customers are Germany and Qatar.

Without giving specific numbers, Leonardo says the number of Japanese students at the school will gradually increase in the coming years, and that Japanese instructors could also work there.

The IFTS is run by Leonardo and the Italian air force. The school also involves an industrial partnership between Leonardo and CAE related to aircraft and simulators.

The school’s fleet is expected to grow to 22 M-346s. In addition to its first branch at Galatina, a second branch at Sardinia’s Decimomannu air force base is under construction.