The US Air Force is likely to declare Raytheon’s foul-weather precision bomb, the StormBreaker, to have initial operational capability (IOC) on the Boeing F-15 fighter before the end of 2019.

Raytheon says as of 6 June the weapon had been test-dropped from aircraft more than 100 times during developmental testing, government confidence testing and operational testing. The StormBreaker is likely to achieve IOC on the Boeing F/A-18E/F Super Hornet in 2020 and the Lockheed Martin F-35B Lightning II in 2022. 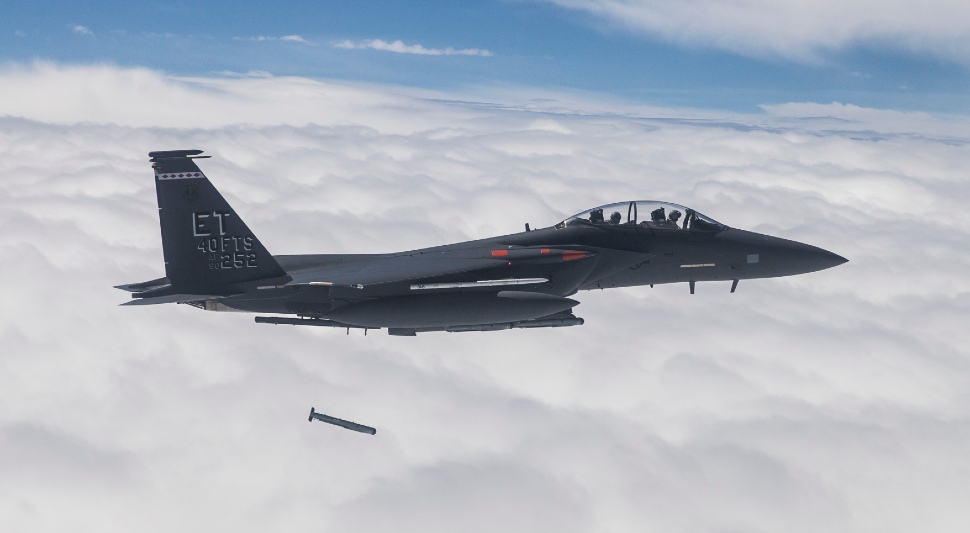 “The operational test and evaluation group is testing it in operational scenarios, which is the final test before they declare it ready to deploy,” says Mike Van Fleet, deputy programme director for the StormBreaker programme.

The StormBreaker is a small-diameter glide bomb with a range of about 39.1nm (72km). The smart bomb can be directed to a target via three different methods: millimetre-wave radar to detect and track targets through weather; infrared imaging to discriminate between targets; and a semi-active laser that enables the weapon to track a target from either an airborne or a ground-based designator.

“It can tell the difference between a tracked vehicle and wheeled vehicle,” says Mike Heyser, senior manager of business development for the StormBreaker programme.

Raytheon contends that the limited room in the F-35’s internal weapons bay means that air forces with the stealth fighter should make the most of the space by carrying a versatile munition, such as the StormBreaker, in order to strike when flying over a target and without needing to wait for clear weather.

“It pairs very nicely with the F-35,” says Heyser. “We are seeing interest from international customers. It lines up with F-35 partners and users.”

In 2017, the US Department of State approved an $815 million Foreign Military Sales deal to supply 3,900 StormBreaker bombs to Australia, saying the precision munition is a complement to the Royal Australian Air Force’s commitment to buy 72 F-35As.