The Super Hornet will be the second aircraft type to cleared to operate the weapon after the F-15E Strike Eagle, says Raytheon. The weapon is also being integrated on the Lockheed Martin F-35. 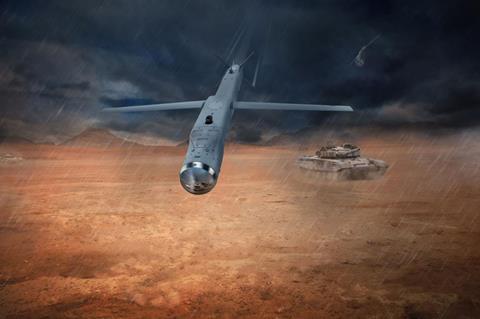 The F/A-18E/F test saw the weapon separate from the jet, which then sent it guidance data while in flight.

The 93kg (204lb) StormBreaker, previously known as the small diameter bomb II, features a tri-mode seeker that incorporates infrared and millimetre-wave radar. In addition, it can be guided by semi-active laser guidance or use GPS.

The weapon can distinguish between tracked and wheeled vehicles, and can fly up to 39nm (72km).

“StormBreaker is the only weapon that enables pilots to hit moving targets during bad weather or if dust and smoke are in the area,” claims programme director Cristy Stagg. “Super Hornet pilots will be able to use poor visibility to their advantage when StormBreaker integration is complete.”

Raytheon says StormBreaker is expected to reach initial operational capability (IOC) later in 2020. At the Paris air show in June 2019, however, the company said that it expected IOC in late 2019.