Defending across the domains

For millennia conflicts have been fought on land and sea, and, in the twentieth century in the air too. In the future, they are likely to also be contested in space and even on the world wide web, as new technologies and tactics are employed to probe and penetrate enemy defences.

Modern military planners now think in terms of these five domains as distinct but linked. Threats may come from one, several, or all of them at once, and those charged with maintaining safety must devise holistic and effective strategies to deter or counter them.

Today’s defence show circuit tends to comprise events that concentrate either on traditional domains – aviation, naval, and land – or cyber security. The space element is often treated as an offshoot of conventions focusing on commercial spaceflight.

Rather than taking this somewhat siloed approach to the challenge, World Defense Show – which debuts in Riyadh in Saudi Arabia early next year – will stand out from the competition in that it will feature all five domains, with an emphasis on interoperability and integrated solutions.

The event – founded by the kingdom’s General Authority for Military Industries (GAMI), the regulator and enabler for Saudi Arabia’s defence sector, and taking place from 6-9 March – will give manufacturers and suppliers in each sector a chance to showcase their products and services in one of the most impressive industry show venues ever built.

With 800,000 sq m of outdoor space at the exhibition site, just one hour’s drive from downtown Riyadh, the World Defense Show will be the only event of its kind to feature both land and air displays. It will also be the first show to have its own purpose-built runway and dedicated airspace for live military aircraft demonstrations.

Each of the five domains will be brought to life through virtual simulations and live demonstrations. For example, even though the show location is inland, state-of-the-art, interactive visual displays will illustrate how technologies can be incorporated into naval systems. 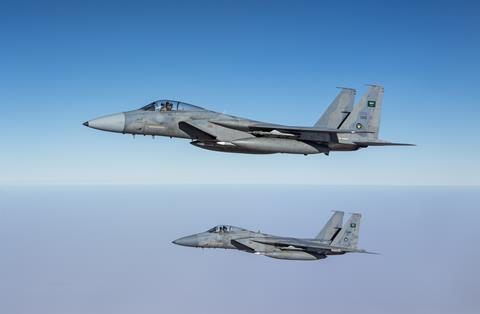 The site is even set to feature a command and control centre where visitors can experience the operational harmony across air, land, sea, cyber and space that the latest integrated systems on the market offer.

Organisers of the World Defense Show – who spent almost two years planning the event in the run-up to its official launch in July 2020 – took into consideration a number of trends in the defence industry and global military market when devising the format.

Firstly, although the sector has survived the Covid-19 pandemic much better than its commercial counterpart, national defence budgets are likely to remain under pressure in coming years. This will prompt national and military leaders to increasingly seek efficiencies and value-for-money solutions.

Traditional “heavy metal” – ships, artillery, armour, and aircraft – are certain to remain vital assets in the defence portfolio. However, unmanned platforms – with surveillance and offensive capabilities, and across air, land, marine and sub-marine – will play a bigger security role. So too will a new generation of compact, less expensive observational satellites.

Other than perhaps in the USA, the notion of national contractors making the bulk of their revenues from a domestic customer are long gone. So another market shift is that defence companies must co-operate across borders, often partnering industrially and sharing technologies with their customers.

Finally, the interoperability of defence assets is one of the most important developments. Recent conflicts have shown how vital it is that military commanders are able to rapidly shift their focus from one domain to another to deal with security threats, while minimising casualties and collateral damage.

With its substantial military budget, Saudi Arabia is an attractive market for international manufacturers. Additionally, there are opportunities aplenty to partner with local industry, with the government in Riyadh committed to securing a 50% share of defence procurement for domestic suppliers by the end of this decade, as part of its Vision 2030 strategy.

That in itself is sure to drive interest in the show from some of the biggest players in the global defence industry – a large number have already signed up. However, the distinct format of the event, with its focus on interoperability, will also be a major draw for any military professional keen to understand the multi-domain potential of the latest technologies.

World Defense Show may be the newest name on the defence expo calendar, but its organisers are in no doubt that – with its unique offering to exhibitors and visitors, coupled with Saudi hospitality – the event will be a must-attend for thousands of industry executives and senior military personnel for years to come.

World Defense Show will be held in the presence of Saudi Arabia’s key leadership, international delegations and prominent industry decision-makers from around the world: www.worlddefenseshow.com