The US Department of Defense (DoD) will provide $2 million in funding to universities across the USA to further accelerate the Pentagon’s development of hypersonic systems.

The DoD announced the initiative on 18 August, noting that four grants of $500,000 each have been awarded to universities with existing hypersonic research programmes. 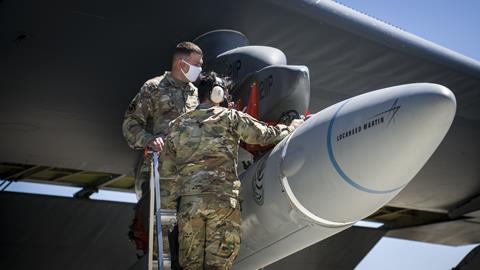 Each research lab will focus on solving a different challenge of engineering the ultra-fast vehicles, generally defined as capable of reaching speeds at or above Mach 5.

The Hypersonic Research Complex at the University of Virginia will develop ways to improve scramjet technology, with the goal of allowing hypersonic vehicles to function in a wide range of flight conditions. Texas A&M University’s Engineering Experiment Station has been tasked with producing a navigation system capable of maintaining flight stability within a hypersonic vehicle’s feedback control system.

Ensuring accuracy at hypersonic speeds will fall to the University of Alabama at Huntsville, which has landed a DoD grant to fund design and development of novel concepts and technologies that can enable hypersonic vehicles to achieve precise altitudes and velocities covering many missions.

Florida International University in Miami will present possible solutions for monitoring the structural health and status of the aero-shell frames that house hypersonic vehicles. Particular focus will be paid to the relationship between mechanical defects and the rapid generation of heat.

The effort to stimulate hypersonic development in academia adds to the wide array of defence-backed research into ultra-fast missiles and aircraft. The US Air Force (USAF) is developing two hypersonic weapons in partnership with US defence manufacturers, including Lockheed Martin, Raytheon and Boeing. A third design is being developed by the government’s internal weapons lab, the US Defense Advanced Research Projects Agency.

The USAF also announced a partnership in July with UK-based Reaction Engines to improve the performance of hypersonic and near-hypersonic engines.

The bid to develop such platforms comes as military leaders in Washington DC are increasingly sounding an alarm, warning that the USA lags in operational hypersonic capabilities, particularly as rivals like China and Russia claim to have produced hypersonic weapons.

America’s top military officer, US Army General Mark Milley, in October 2021 described a Chinese test of a hypersonic weapon as “very concerning”, likening it to the Soviet Union’s surprise launch of the Sputnik satellite that launched the Cold War-era space race.

However, Milley has downplayed the impact of those weapons in the ongoing war in Ukraine. During recent congressional testimony, he described hypersonic weapons as having no “significant or game changing effect” on the course of that conflict.

In contrast, one realm of potential conflict that observers expect could be influenced by hypersonic weapons is the growing tension between the USA and China over Taiwan and the South China Sea.

China has developed an array of hypersonic missile systems, including ground-launched models like the DF-17 and DF-21, and the ship- or air-launched YJ-21 hypersonic anti-ship missile.

While the real world capability of these weapon systems remains largely opaque, military strategists caution that the relatively cheap missiles give China a potential advantage over the USA.

Mark Cancian, a former US Marine Corps officer and current researcher at the Center for Strategic and International Studies, is running war games to understand how a conflict over Taiwan might play out. He tells FlightGlobal that the US military’s fixed air bases in Japan and Guam, as well as US Navy aircraft carriers, will all be extremely high-value targets for China in the opening hours of such a conflict.

Hypersonic weapons, whose high speed makes them difficult to defend against, pose potentially substantial threats to these assets, which Cancian says would be essential to any US-led military campaign near the Taiwan Strait.