Acquired via the UK Ministry of Defence following its retirement from service, the aircraft underwent depth maintenance at Marshall Aerospace and Defence Group's Cambridge airport site before being approved for a return to operational use. Flight Fleets Analyzer shows that the aircraft – which now carries the Royal Bahraini Air Force registration 702 – is 19 years old. 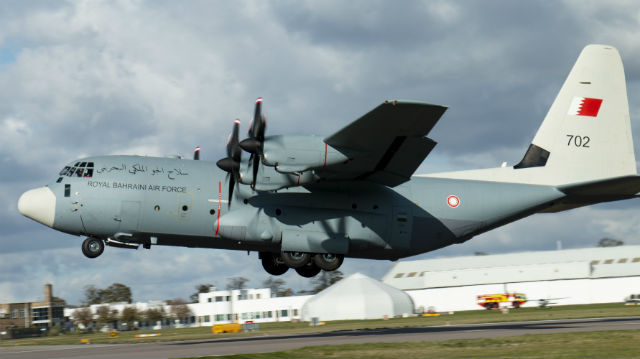 Marshall says work also included "some minor modifications and a full aircraft repaint". The UK company is also responsible for providing Manama with "elements of an initial operational capability set-up" to support the type's introduction.

Bahrain's acquisition of the surplus RAF aircraft plugs a previous capability gap, as it was the only Gulf Cooperation Council nation with no tactical airlift assets. Its first Hercules is expected to make a debut appearance at the Bahrain air show, running from 14-16 November.

"Delivery of this aircraft sees the first government-to-government transfer of a C-130J, and the Kingdom of Bahrain enter the C-130 community as a new operator," says Matthew Harvey, Marshall Aerospace and Defence Group's international sales director, military aerospace.

The UK MoD opted to retire the RAF's short-fuselage C-130Js, while retaining its stretched examples. It has also sold two examples to Bangladesh, while another is to provide logistics support for the US Navy's Blue Angels aerobatic display team.