Air China has completed its maiden flight of a Comac ARJ21 regional jet on the domestic routing from Beijing Capital airport to Xilinhot.

The Star Alliance carrier took delivery of its first of the regional jet on 28 June alongside China Eastern Airlines and China Southern Airlines. While there are more than 30 ARJ21s already in service with Chinese regional carriers, Comac described the delivery of the type to China’s ‘big three’ operators as the “official entry” of the ARJ21 into the fleets of international mainstream airlines. 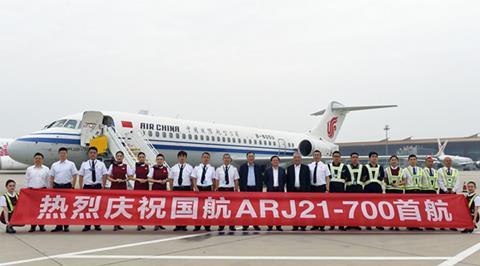 Air China’s ARJ21-700 is configured in an all-economy, 90-seat, five-abreast configuration. It is one of three of the type AIr China will take delivery of this year. The airline ordered 35 of the type in August last year.

The aircraft are slated to operate on services linking Beijing Capital to Baotou, Ulanhot, Hohhot, Xilinhot and other routes in Inner Mongolia.