Air New Zealand has taken delivery of its first Airbus A321neo for deployment on domestic services.

The aircraft (ZK-OYA, MSN10963) arrived in Auckland on 1 November from Airbus’ Hamburg facility. It is the first of seven domestic A321neos the Star Alliance carrier will be taking through 2026. 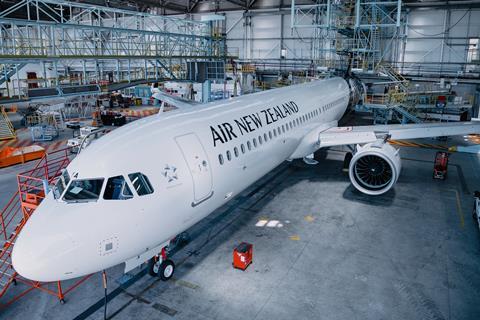 Air New Zealand says the aircraft is undergoing a series of pre-service readiness checks before it operates its first commercial service on 8 November, flying from Auckland to Wellington.

The new narrowbodies will fly between Auckland, Wellington, Christchurch, Queenstown and Dunedin, it adds.

Cirium fleets data shows the airline to have a fleet of 17 A320ceos, with the type operating both domestic and short-haul international flights. Air New Zealand also has a fleet of six other A321neos configured for international flying.

Separately, the airline has resumed flights to all 29 points on its pre-pandemic international network, as it adds flights to Chicago and Bali.

On 31 October it stated that it is operating three-times-weekly flights with Boeing 787-9s between Auckland and Chicago. It is the airline’s seventh North American point, after Honolulu, Houston, Los Angeles, San Francisco, Vancouver and New York City.

Air New Zealand will also resume operations to Bali in March 2023, deploying its 787s on thrice-weekly flights, which will run through October 2023.