Prolific Boeing operator Xiamen Airlines has ordered 40 new Airbus A320neo-family aircraft in a $4.8 billion deal seen as a coup for the European airframer in the world’s largest aviation market.

The 40 jets will be delivered between 2024 and 2027, said China Southern Airlines, which owns 55% of Xiamen Airlines, in a stock exchange filing on 22 September.

Xiamen Airlines, which will become Airbus’s newest Chinese customer, says the order will “help [it] ensure the safety of its strategic development, continue to promote the structural adjustment of its fleet”. 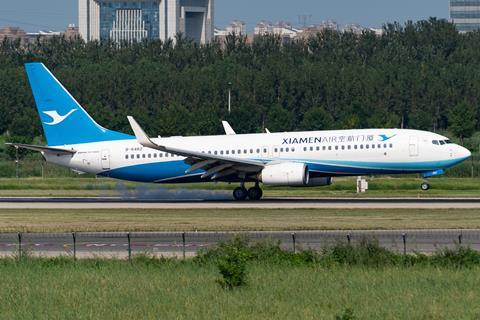 Xiamen Airlines is an all-Boeing operator, and flies 737s and 787s.

The SkyTeam carrier adds: “It is expected that the Airbus aircraft will have good economic and comprehensive performance, which will help further improve the operating efficiency of Xiamen Airlines and provide passengers with a comfortable air travel experience.”

They will be the first Airbus jets to enter the airline’s fleet, which has historically been a Boeing operator. Its current fleet comprises over 150 787s and 737s, according to Cirium fleets data.

More crucially, the latest order comes amid uncertainty about the return of the 737 Max in China. The type is not flying in the country, despite regulators lifting an operational ban that followed two fatal crashes.

Xiamen Airlines has 10 737 Max 8s in storage, and a further 25 on order. Meanwhile, the ‘Big Three’ have also omitted the 737 Max in their delivery plans until the end of next year.

On 15 September, Boeing chief executive Dave Calhoun said that a small number of 737 Max jets bound for China are being re-marketed to other carriers, and confirmed that deliveries of the type to China have yet to recommence.