Austrian to start 767 phase-out in March

Austrian Airlines is preparing to retire Boeing 767s as part of a wider fleet-reduction effort.

The Lufthansa Group carrier says the first 767-300ER (OE-LAT) will leave its fleet in early March, and that two further aircraft (OE-LAX and OE-LAW) are scheduled to be retired in autumn.

Cirium fleet data shows that Austrian has six 767-300ERs within a fleet that also includes 777-200ERs, Airbus A320-family jets, Embraer 195s, and De Havilland Dash 8-400 turboprops. Around half of the 80-strong fleet is listed as being in storage. 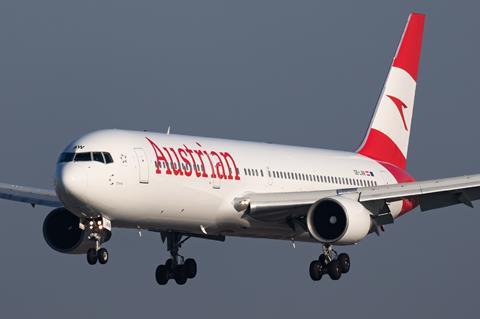 OE-LAW is due to be retired in the autumn

The airline says it intends to reduce its fleet to 60 aircraft by the beginning of 2022.

Some 10 remaining out of previously 18 Dash 8-400s are scheduled to be retired from March. The turboprops’ phase-out programme had begun before the pandemic.

The fleet-reduction effort also includes the retirement of Austrian’s seven-strong A319 fleet, it says.