China Aircraft Leasing has placed an order for 30 Comac ARJ21 aircraft with an Indonesian airline, in which CALC and two of its most senior executives have a 49% stake, as a co-buyer.

The aircraft will be delivered “in stages” up to 2026, according to an 8 January filing to the Hong Kong stock exchange by the locally based lessor.

The agreement includes a purchase option for 30 additional ARJ21s. 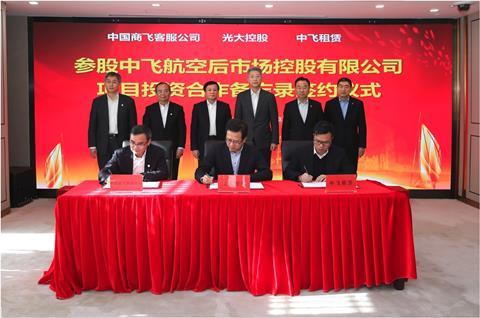 CALC holds its stake in TransNusa via Aviation Synergy (Caymen), which in turn owns Naga Pacific Holdings, which has a 49% stake in TransNusa, a 4 March 2020 Hong Kong stock-exchange filing and the 8 January one show.

In the 4 March statement, CALC called its investment in TransNusa a “significant move for CALC to expand its downstream footprint to cover the entire aviation value chain” and “aligning the group’s business strategy in combining vertical integration and horizontal expansion”.

Earlier, in December 2019, CALC had signed a strategic co-operation agreement with TransNusa to “boost [the airline’s] next phase of growth and expansion”. It added that the deal would help TransNusa “enhance its ability to deliver excellent air transportation services” and raise its safety standards, though pointed out that the airline had had zero incidents in eight years.

TransNusa has no other aircraft on order, Cirium fleets data shows, and these ARJs would significantly expand its fleet. The airline has nine aircraft, comprising of one ATR 42-500, seven 72-600s and one BAe 146-100. All the aircraft are on lease from Nordic Aviation Capital, besides the BAe 146, which the airline owns.