Cape Air is the nine-passenger P2012’s launch customer and has said it intends to purchase at least 100 of the Lycoming TEO-540-C1A-powered aircraft. 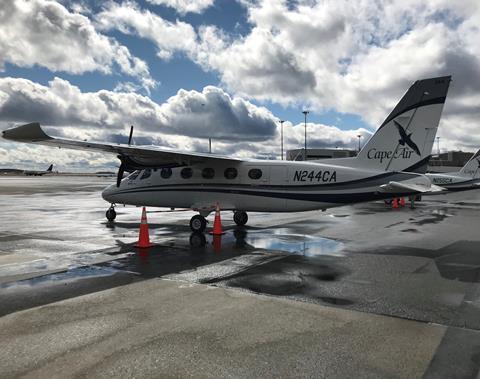 The deliveries are part of Cape Air’s “final target of [acquiring] 100 aircraft to replace its legacy aircraft fleet”, Tecnam says.

Cape Air did not immediately respond to a request for comment.

Cessna 402Cs have long been the backbone of Cape Air’s fleet but have logged decades of airline work. Some of Cape Air’s 402Cs were manufactured more than 40 years ago, according to Cirium fleets data.

Cape Air has said the P2012s have similar economics to the 402Cs, which are powered by Teledyne Continental 0-520 TSIO-520 piston engines.

But the new P2012s have wholly modern technology that includes Garmin-manufactured avionics.

The Hyannis, Massachusetts-based airline flies a series of routes in the Northeast USA, linking the islands of Nantucket and Martha’s Vineyard to the mainland, and operating other flights that radiate from Boston. Cape Air has smaller operations from Montana, the US Midwest and Puerto Rico.

It is now operating P2012s from Boston and on Midwest routes, according to Cirium.