Caribbean Airlines has carried out its initial revenue flight with the fleet’s first Boeing 737 Max 8.

The airline, which is headquartered in Port of Spain in Trinidad & Tobago, says on 14 January the aircraft took passengers from the city’s Piarco International airport to Kingston, Jamaica. 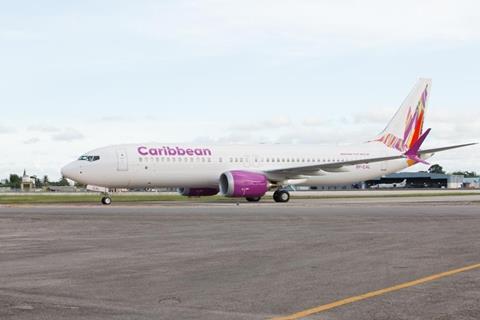 “The introduction of this new aircraft into service represents Caribbean Airlines’ initiative to reset expectations for 2022,” says the carrier’s chief executive, Garvin Medera. “The 737-8 is the most technologically advanced aircraft in the world and it brings a range of benefits for Caribbean Airlines, our customers, and the environment.”

The airframe, which carries the registration 9Y-CAL, arrived at its home airport in November. The aircraft is outfitted with 160 seats in a two-class configuration.

Last June, the carrier cut 25% of its staff or 450 employees and stored many of its aircraft as it pursued a restructuring strategy in the wake of the devastating coronavirus crisis that began in early 2020. After Trinidad & Tobago’s borders reopened in July, the airline began restoring service to destinations across the region.

According to Cirium fleets data, the airline currently has seven ATR 72-600 turboprops in operation, as well as seven earlier-generation Boeing 737-800 aircraft. It has four more Boeing 737 Max 8s awaiting entry into service, and one on order. The airline announced the Max order in 2018 and the aircraft are destined to replace the older 737-800 models.