The delivery marks the first time an airframe from Embraer’s E-Jet family is being operated commercially in the Caribbean. 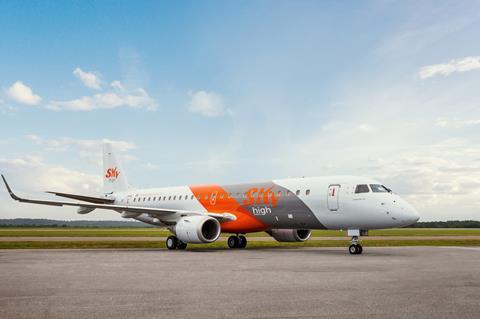 Dominican carrier Sky High is the first Caribbean airline to operate one of Embraer’s E-Jet series of aircraft.

“The addition of the E-190 to its current fleet will more than double Sky High’s capacity, and their customers will benefit from the best-in-class comfort of the E190 two plus two configuration, with no middle seats,” says Mark Neely of Embraer Commercial Aviation.

Sky High currently operates a fleet of two 50 seater Embraer ERJ 145s flying to ten destinations in the Caribbean. The twin-engined E190s are configured in a dual-class layout with 98 seats and will serve Sky High’s existing destinations, as well as opening new international routes to the United States, Central and South America.

“It’s a huge differentiator for us to be the only operator in the region with E-Jet capability”, says Juan Chamizo Alonso, President of Sky High Aviation on 1 June, describing the E190 acquisition.

“The E190 is the perfect aircraft to help manage demand in peak times, as well as to open and maintain the international routes essential for our continued development as a leading Caribbean operator,” he adds.

The second E190 will be delivered to Sky High later this month.

Sky High Aviation is taking delivery of two Embraer E190 passenger jets, making it the first Caribbean carrier to operate an airframe from the E-Jet family.