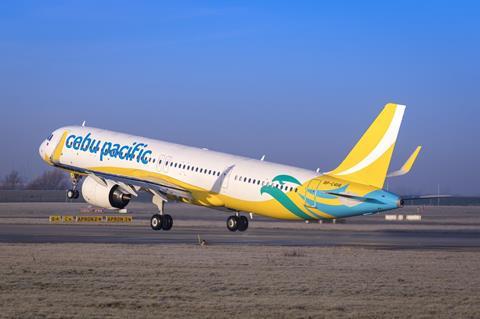 “We are looking to put more aircraft for long-term storage, but this is still under study given volatility in market demand and travel restrictions,” says Reyes.

“We have had positive discussions with Airbus and our engine suppliers regarding our pending orders,” says Reyes.

“The current plan is in line with our conservative forecast in the coming years, given our current situation. We will proceed as planned per our long-term vision, which includes the continuation of an orderly exit strategy of older aircraft that began before COVID-19.”

He adds that the airline continues to target sale & leaseback transactions, per its pre-pandemic plans.

Cebu Pacific has been working to restore flights after operating less than 10% of its domestic network from June to November. It is now operating 400-450 flights weekly to 28 domestic and eight international destinations.

In its third quarter ended 30 September, Cebu Pacific and its units reported an operating loss of Ps6.7 billion ($139 million), reversing the Ps873 million quarterly operating profit it made last year.