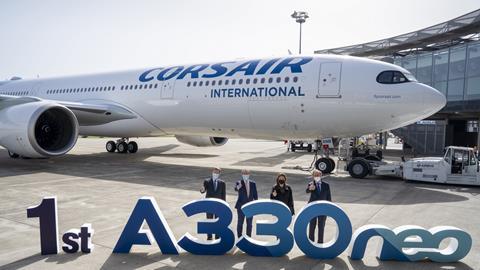 French leisure carrier Corsair has taken delivery of its first Airbus A330-900 on lease from Avolon, becoming the first operator to receive the higher-weight version of the widebody.

The airline is adding five A330neos as part of a strategy first unveiled in 2019 to become an all-A330 operator. Corsair already operates five A330s and is replacing its Boeing 747s with the new Airbus widebody.

Corsair will deploy the Rolls-Royce Trent 7000-powered A330neo in a three-class, 352-seat configuration. 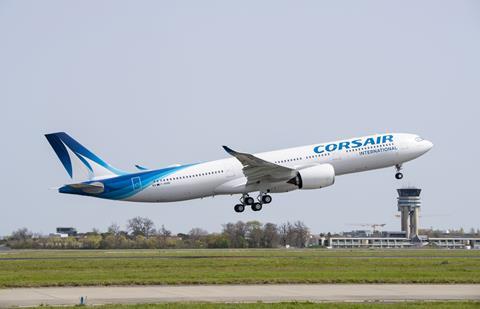 The Corsair aircraft is the first A330neo to feature an increased maximum take-off weight of 251t, after Airbus in October secured certification from the European airworthiness authority for the higher-weight A330-900. Airbus says this will allow Corsair to fly long-haul destinations up to 13,400 km (7,200nm) or benefit from more payload on board.

The airline has previously said it expects two more A330neos to join the fleet in May and June, with the fourth due for delivery in December and a fifth in June 2022.

New investors led by Eric Kourry and Patrick Vial-Collet took full ownership of the airline at the end of December after Intro Aviation and TUI Group sold their interests in Corsair to the consortium.