US express delivery company FedEx applied with the Federal Aviation Administration in 2019 for authority to install a missile-defence system on Airbus A321s – an aircraft type FedEx does not yet operate.

The US company has previously participated in airborne missile-defence systems tests using Boeing MD-10 freighters. Such countermeasures have been considered as a defence against man-portable weapons, notably since an attempted attack on an Israeli aircraft at Mombasa in 2002.

FedEx, a longtime Boeing customer, does not operate Airbus narrowbodies.

“On October 16, 2019, FedEx applied for a supplemental type certificate to install a laser-based missile-defence system, which directs infrared laser energy toward heat-seeking missiles, on the Airbus [A321],” the FAA says in a new regulatory filing.

“In recent years, in several incidents abroad, civilian aircraft were fired upon by man-portable air-defence systems,” it adds.

Whether FedEx’s application indicates it intends to acquire A321s – and equip them with missile-defence systems – remains unclear. The company has not responded to a request for comment from FlightGlobal.

But several companies offer A321 passenger-to-freighter conversions. Those include Elbe Flugzeugwerke, a joint venture between Airbus and ST Engineering that offers its A321P2F. 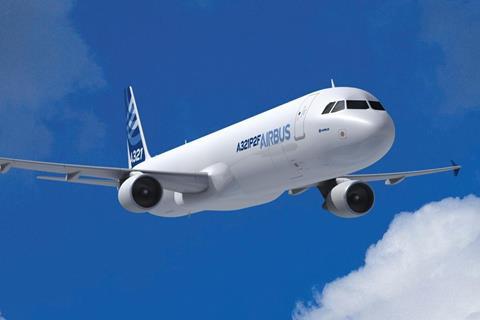 Several organisations, including Airbus through its EFW venture, offer A321 freighter conversion

The FAA’s recent regulatory filing responds to FedEx’s 2019 application. The document, made public on 14 January but issued 7 January, proposes conditions under which the FAA would approve FedEx’s missile-defence system installation.

The system’s design must prevent its activation while the aircraft is on the ground, and its operation must not damage any aircraft or cause human injuries, the FAA says. “Infrared laser energy can pose a hazard to persons on the aircraft, on the ground and on other aircraft.”

FedEx worked with Northrop Grumman to test anti-missile systems on MD-10 freighters about 15 years ago.

Missile strikes have downed a number of civilian aircraft in past decades. Most recently, on 8 January 2020, Iranian forces fired on a Ukraine International Airlines Boeing 737-800 shortly after the jet took off from Tehran. The 737 crashed, killing 176 people. Iran said its forces mistook the jet for a hostile target.

In July 2014, a Malaysia Airlines 777 crashed in Ukraine after being struck by a Russian-made missile, Dutch investigators say. That crash killed 298 people.