Flynas signs off on strategy envisaging raising aircraft orders to 250

Saudi Arabian budget operation Flynas has outlined a strategic plan for the remainder of the decade, under which it intends to lift its aircraft orders to 250.

The airline, which launched operations in 2007 as Nas Air before later rebranding as Flynas, operates 22 Airbus A320neos and a dozen A320s, Cirium fleets data shows. It also has 68 A320neos and 10 A321neos on order. 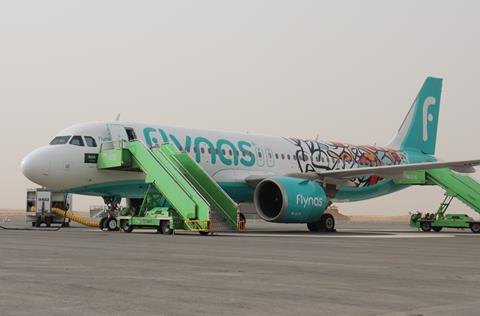 Flynas chief executive Bander Almohanna says: “The decision of the board of directors of Flynas to raise our new aircraft orders to 250 supports our effort to achieve the Civil Aviation Strategy, and expresses the board of directors’ belief in the growth opportunities and positive perspective of domestic and international markets.

“From our position as a Saudi air carrier, we see great opportunities for expansion supported by the strategic location of the Kingdom and the prospects opened by Saudi Vision 2030 for the air transport sector. This is reinforced by the launch of the Civil Aviation Strategy, which aims to increase the annual passenger traffic to 330 million and connect KSA with more than 250 destinations worldwide by 2030,” he adds.

Almohanna says the airline is currently in discussion with aircraft manufacturers regarding the drafting of agreements.

As part of the strategic plan, Flynas is also “exploring” the opening of new bases in several unspecified countries.