The Twin Otters will transport passengers from Manila to Amanpulo, a luxury beach resort in Palawan, Philippines, De Havilland Canada said 20 December. The company did not specify financial details or when the aircraft would be delivered.

“De Havilland Canada is delighted to see the Twin Otter return to operation in the Philippines after a long absence and with such an experienced and well-regarded operator as Island Aviation,” says Philippe Poutissou, vice-president of sales and marketing for De Havilland Canada. 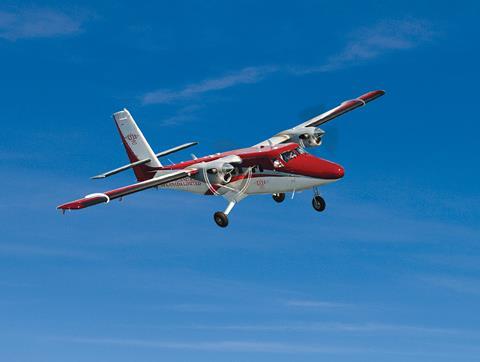 Island Aviation – founded in 2003 as A. Soriano Aviation – uses three Fairchild Dornier 228 turboprops equipped with 19 seats to operate direct charter flights to “nearly anywhere in the country”, says the company’s website. It formerly operated one Beechcraft King Air 100, according to Cirium data.

“We selected the Twin Otter to support our operations because of its long record of in-service reliability and low operating cost,” says Emmanuel Generoso, chief operating officer of Island Aviation.

“Used worldwide for island hopping and commuter travel”, the Twin Otter has a configurable 19-passenger cabin, according to De Havilland. More than 140 Twin Otter 400s have been delivered to customers globally.