Low-cost long-haul start-up Norse Atlantic Airways took delivery of its first aircraft at Oslo airport on 20 December, as it prepares to launch transatlantic flights in spring 2022.

“The delivery of our first Dreamliner marks an important milestone for us at Team Norse as it brings us one step closer to the launch of attractive and affordable transatlantic flights,” says Norse Atlantic chief executive Bjorn Tore Larsen.

The Boeing 787-9 – delivered as OE-LNY and taking the registration LN-FNB in Norse Atlantic service – is leased from BOC Aviation and was last seen in Norwegian colours under the registration SE-RXY, according to Cirium fleets data, with Argentine artist Xul Solar featured on the tail. It did not enter service with Norwegian, however, having been parked on handover to the airline in July 2019, data shows. 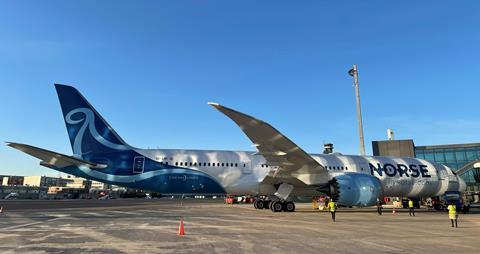 Norse Atlantic plans to operate a fleet of 12 787-9s and three Boeing 787-8s by summer 2022, with deliveries continuing through to April, it states. The carrier has secured the aircraft on a “power by the hour” basis, it says, enabling a “flexible implementation during the start-up” of operations.

All of its aircraft will be initially parked at Oslo Airport, Norse Atlantic notes, from where it is planning to launch flights to “select cities in the US” in spring.

Cirium data shows that all of Norse Atlantic’s incoming 787s – which are powered by Rolls-Royce Trent 1000 engines – were originally operated by Norwegian.

In launching low-cost long-haul fights between Europe and the USA, Norse Atlantic is aiming to step into the gap abandoned by Norwegian during its restructuring process.