Omani low-cost carrier SalamAir has placed a firm order for six Embraer E195-E2s with six options, as its seeks to expand its currently all-Airbus fleet.

The Pratt & Whitney PW1900G-powered aircraft will be delivered from end-2023, according to an announcement made during the Istanbul air show on 6 October. 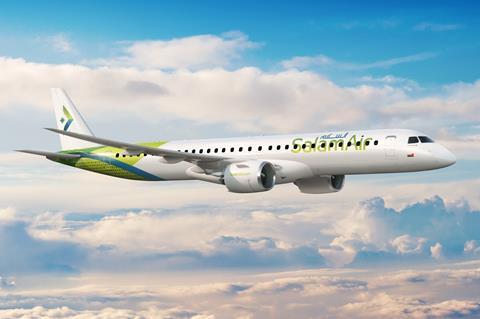 Deliveries are set to begin from late next year

“These aircraft are perfect for the next frontier of our growth,” says SalamAir chief executive Capt Mohamed Ahmed. “They will allow the airline to open new local and regional cities and increase its frequency to these destinations due to its fuel efficiency and capacity, which suits the needs of these markets.

“The new fleet will be used on domestic flights initially, including the four oil fields and four international airports within Oman, [but] as we receive more aircraft we will be able to use them on regional airports in neighbouring countries which today are not connected to Oman.”

Embraer Commercial Aviation chief executive Arjan Meijer hails “the importance” of the order to the airframer, saying it shows how “a pioneering low-cost carrier like SalamAir recognises the value that E-Jets deliver in the low-cost scenario, complementing larger narrowbodies to grow and maintain networks”.

The aircraft will feature a dual-class cabin of 135 seats.

The budget operator signed a cooperation agreement with flag carrier Oman Air in March this year, under which the carriers are aiming to “align both airlines’ networks for passenger growth in and out of Oman”.