RwandAir is no longer taking the Airbus A330neo or Boeing 737 Max jets it had ordered via lessors.

The African operator was due to receive two of each type, but is instead working with future partner Qatar Airways on a new fleet plan.

“The process of rationalising the fleet and working on the fleet mix is still a work in progress,” RwandAir chief executive Yvonne Makolo told FlightGlobal on 8 September. “In line with our growth with our future partner, the fleet mix will change,” she adds, noting the large number of types currently operated by the carrier.

She confirms that RwandAir is “no longer moving forward with the neos for now”, adding that the decision to cancel the Max jets was taken “even pre-this crisis”.

Cirium fleets data shows the A330neos were to be supplied via Air Lease, while the Max jets were ordered through SMBC Aviation Capital. All four were ordered in 2018 and were originally due to arrive in 2019. 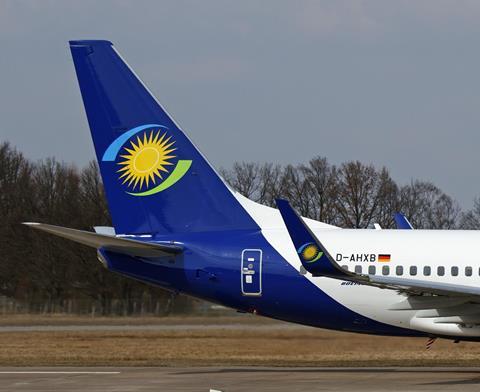 RwandAir is taking steps to address its fleet mix

The new aircraft were intended to boost Rwandair’s capacity – with the A330neos launching a New York service – but the grounding of the Max and various delays affecting the A330neo meant none had been received by the time the global pandemic began.

In the meantime, amid the challenges created by the coronavirus crisis, “we are going to keep the fleet as it is for now”, Makolo states, explaining that “we’ve had to slow down” network-expansion plans amid the current uncertainties.

Qatar Airways chief executive Akbar Al Baker revealed in February that the Middle Eastern carrier was in talks to acquire 49% of government-owned RwandAir, and Makolo confirms that those discussions are ongoing.

Recent history suggests Qatar Airways is open to leasing its aircraft to carriers in which it has an equity stake. Now-defunct Air Italy, for example, leased A330s and 737 Max jets from Qatar Airways before its collapse.