Singapore Airlines will be the first airline to operate the Airbus A350 freighter, after it committed to seven examples, with a further five options.

The A350F, the first of which will be delivered to the carrier in the fourth quarter of 2025, will replace the existing fleet of Boeing 747-400 freighters, said SIA in a 15 December statement. 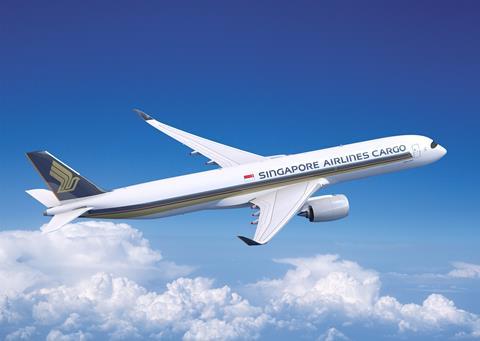 The agreement to purchase the seven freighters – officially launched during this year’s Dubai air show in November – also includes an order swap, involving two A350-900 passenger aircraft, as well as 15 A320neos meant for low-cost unit Scoot.

“This allows SIA to manage its capital expenditure, while continuing with the essential freighter renewal programme,” states the Star Alliance carrier, which operates the world’s largest A350 fleet, at 56 aircraft.

It adds: “Renewing the freighter fleet reflects SIA’s continued investment in the air cargo segment, which is a core business for the company.

“Adding the A350Fs will reinforce SIA’s leading position in the sector, while strengthening Singapore’s position as a global air cargo hub.”

According to Cirium fleets data, SIA operates a fleet of seven 747-400 freighters. The Pratt & Whitney PW4000-powered jets are aged between 15 and 21 years.

Cargo has been key in boosting SIA revenue when passenger travel demand collapsed during the pandemic. In the six months to 30 September, SIA Group’s cargo revenue increased 51% year on year to a record S$1.9 billion ($1.4 billion).

The order makes SIA the third customer for the A350F, which has also secured commitments from French logistics firm CMA CGM Group, as well as launch customer and lessor Air Lease.

Airbus’s A350F is slightly shorter than the A350-1000 but still based on its 319t maximum take-off weight, and will have a payload capability of 109t.