Lufthansa Group carrier Swiss International Air Lines will take five Airbus A350-900 aircraft into its fleet from 2025, which are slated to replace its ageing A340-300 fleet on long-haul routes.

The Zurich-based carrier said on 12 December that the new aircraft will ”help Swiss substantially further improve its carbon emission credentials”. 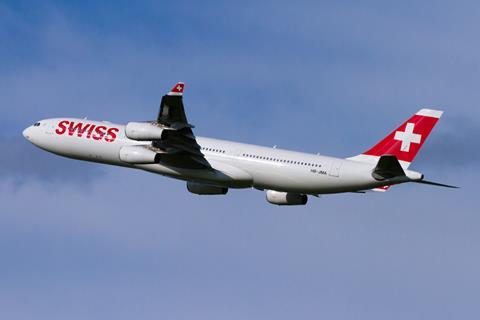 “We are very pleased to have achieved our turnaround after the coronavirus crisis and be back on a sound financial track,” says Swiss chief executive Dieter Vranckx. “With this planned substantial modernization of our long-haul aircraft fleet, we are setting a vital course to sustainably maintain our competitive edge over the longer term.”

”Our decision to acquire the Airbus A350-900 is a clear commitment to further enhancing the sustainability of our flight operations,” Vranckx adds. “Our new long-haul twinjet will play a substantial part in achieving our ambitious climate goals.”

According to Cirium fleets data, the airline currently operates 12 Boeing 777s, 11 A330s and four A340s for its long-haul operations.