Vietnam low-cost carrier Vietjet has taken delivery of its first widebody aircraft, a leased Airbus A330-300.

The airline took delivery of the aircraft on 25 December, marking the 10th anniversary of the airline’s first flight, says the carrier. 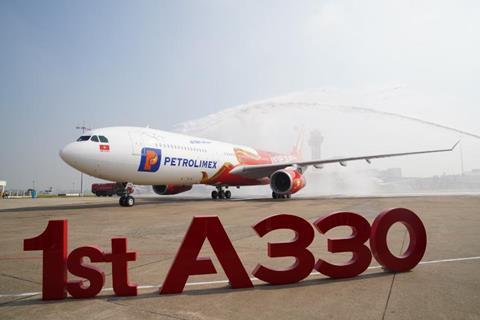 Prior to the arrival of the A330, Vietjet has only operated A320 family jets

According to Cirium fleets data, the aircraft is managed by ICBC leasing. It was delivered new to AirAsia X in December 2008, and served with the Malaysian long-haul, low-cost carrier until it was parked in April 2020.

The aircraft briefly returned to service from February to May, but then was placed in storage.

“We are delighted to mark our 10th anniversary today with an A330 aircraft’s arrival, which will help Vietjet grow significantly in operation capacity and international footprint expansion,” says Vietjet managing director Dinh Viet Phuong.

Vietjet has previously said that it will lease up to three A330s-300s.

It is not clear where Vietjet will initially operate the A330, but longer term it has plans to serve Europe, with services to Moscow to commence in mid-2022.

The flights will operate to Moscow’s Sheremetyevo Airport.