WestJet plans to launch a dedicated cargo service and to expand its fleet of Boeing 737-800 freighters, the first of which is expected to be in service by the second quarter of 2022.

“As WestJet Cargo expands, so too, will its team, network and flight plans,” the Calgary-based airline states. 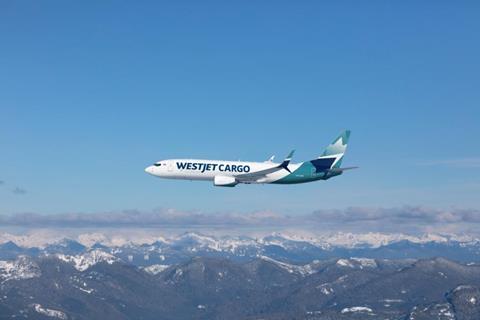 The ongoing shortage of air freight capacity due to the grounding of passenger aircraft and the lack of international flights amid the Covid-19 travel downturn gives Canada’s second-largest airline an opportunity to diversify its revenue by providing freighters.

Global demand for air freight in April was 12% higher compared with that month in 2019, according to the latest report from trade group IATA.

The eventual return of belly cargo flown on international routes by widebody jets, IATA predicts, will encourage airlines to retire older freighters and replace them with newer, more fuel-efficient freighters. WestJet is ahead of that trend by making converted 737-800 freighters the workhorse of its dedicated cargo operation.

The WestJet fleet is dominated by 737NG aircraft, including 24 737-800s in service and 24 in storage across the mainline carrier and its subsidiaries Swoop and WestJet Encore, Cirium fleets data shows.

Air freight can supplement WestJet’s coffers as Canada’s airlines resume routes in step with the slow loosening of travel restrictions in that nation.

Air Canada has also increased its focus on air freight during the pandemic and its cargo subsidiary in October plans to debut its converted Boeing 767-300ER freighters on routes from Toronto to the USA, Peru and Mexico. The flag carrier aims to add more routes and freighters to its cargo network in early 2022.

Mississauga-based Cargojet Airways seeks to expand its air freight network into the USA but its chief executive Ajay Virmani tempered expectations about Canada’s cargo market on 3 May during an earnings call.

Air freight opportunities in Canada are growing more slowly than in the USA and Europe, Virmani said during the call, because “much of Canada’s retail or services businesses [are] still closed”. Federal and provincial Covid-19 restrictions will have to loosen and vaccinations will have to increase to enable a more profitable cargo market in Canada.