Eric Gatlin wants to make additive manufacturing mundane. That may sound strange for someone who spearheads GE Aviation’s adoption of one of the most potentially transformative technologies in the production of aircraft parts. After all, scarcely a week goes by without an announcement of some new frontier being reached in the capabilities of what is also known as 3D printing – the process of constructing complex metal or plastic structures from powders, one tiny layer at a time. 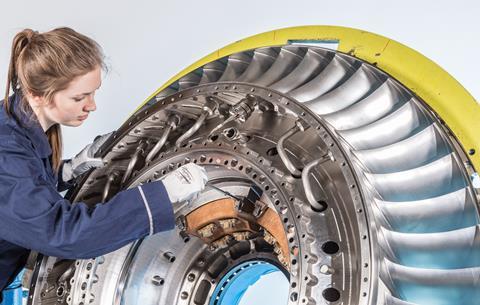 Engine companies such as Rolls-Royce have been dabbling in additive manufacturing for decades, but the switch into production parts has been recent

But that is the point. Such is its advance that Gatlin is convinced that well within this decade 3D printing will become not just an effective way of rapidly creating one-off or low-volume parts, but competitive for volume production of even large metal components. That is because modern printers can now engineer highly complex parts in one piece, something beyond the capability of the most sophisticated milling machines. “We are taking the physics to a different level,” he says.

Additive manufacturing is not new to aerospace. The likes of GE Aviation and Pratt & Whitney were enthusiastically dabbling in 3D rapid prototyping in the early 1990s. However, it has largely been in the past 10 years that the technology has broken through to parts production. GE’s 2012 acquisition of additive specialist and Cincinnati neighbour Morris Technologies was a significant step. Stratasys, a pioneer in 3D printing kit, has also spent the past decade targeting the aerospace sector.

The past 18 months have seen a flurry of landmark announcements in the propulsion sector and beyond. In June, GE received what is known as engineering change proposal approval from the US Air Force for an additive manufactured sump cover on its F110 that powers the Lockheed Martin F-16 among others. It is the first engine component manufactured using the technology to be qualified by any arm of the US Department of Defense.

Belgian company Materialise said in May that it had been cleared by Airbus to produce flight-ready parts for its supply chain using an additive manufacturing process known as laser sintering. Materialise was already making Airbus components using a more common type of 3D printing, fused deposition modelling (FDM), including on 100 part numbers on the A350. Adding a laser sintering qualification will allow an increase of applications on Airbus aircraft, says the firm.

Last October, Boeing approved a new thermoplastic material made by Stratasys, called Antero 800NA, that the Israel-headquartered business says allows the airframer and its suppliers to additive-manufacture higher-fatigue structural components, able to withstand higher temperatures than products traditionally made using 3D printing. Stratasys builds machines that serve industries from automotive to medical supplies, but aerospace is now one of its biggest two markets.

Additive manufacturing has also been making strides in the aftermarket. In February 2020, P&W said it had achieved a maintenance, repair and overhaul first with a 3D-printed aero engine fuel system component, designed in partnership with Singapore’s ST Engineering. The part would help “reduce dependency” on the traditional supply chain, said the engine maker, which described additive manufacturing as a “game-changer for the MRO industry worldwide”.

Also in MRO, Airbus services arm Satair said earlier this year that it had provided a US airline customer with “what is believed to be the first certified metal printed flying spare part”, a wingtip fence for the previous-generation A320. The cast-manufactured component was no longer available from the original supplier, and this led Airbus to develop its “alternative solution”, according to Felix Hammerschmidt, head of additive manufacturing at Satair.

Rolls-Royce has been investing heavily in additive manufacturing since using the technology to produce a front bearing housing on the A350-1000’s Trent XWB-97 in 2015 – the first flying component on one of its engines. The component did not go into serial production, but “we knew the value lay in its design complexity, and that we could industrialise it,” says R-R manufacturing director Neil Mantle.

The next step for the UK propulsion firm was to set up an additive manufacturing site in Rotherham, which has engineered what will be R-R’s first serially-produced additive parts, combustor tiles for the Pearl 10X, the new engine that will power Dassault’s latest Falcon 10X. The 1.4mm-thick nickel alloy tiles will be made using laser powder bed fusion, the first time R-R has deployed this technique, which requires thinner layers than electron beam melting, the previous method. 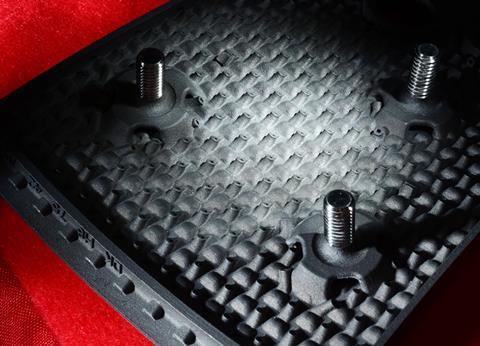 Tiles form a thermal protection shield, so must withstand extremely high temperatures. They are traditionally manufactured by casting and drilling hundreds of cooling holes, but that limits the introduction of “more enhanced cooling geometries”. Using additive manufacturing means “we can cool the component much better”, with cooling efficiency increased by 20%, according to Philipp Zeller, senior vice-president for the Pearl 10X programme.

This requires a more complicated design than is achievable with traditional manufacturing. “We are using the ability of additive to come up with geometries that we couldn’t by any other means,” says Mantle. “You can produce pretty complex things with laser drilling, but everything has to be line of sight – you can’t drill round corners. With additive manufacturing, all that geometrical complexity is possible.”

With the Falcon 10X due to enter service in 2025, R-R plans to start manufacturing the parts for the Pearl 10X – each engine contains around 64 tiles, of six different designs – using two machines installed at Rotherham, but “based on volumes we will expand”, says Zeller. R-R has been experimenting with additive manufacturing for between 10 and 15 years, but he describes the move into serial production with the Pearl 10X as a “big milestone for us”.

Like its two main rivals, P&W is a veteran when it comes to additive manufacturing, and made its first production part – a bridge ring bracket on the PW1500G’s actuation system – in 2017. In recent years, “the pace has picked up tremendously”, says Jesse Boyer, fellow in additive manufacturing. To date, the Raytheon Technologies company says it has made more than 100,000 additive manufactured prototypes, including several components on the geared turbofan family.

Factors taken into consideration, he says, include: will additive-manufacturing a part reduce lead time, particularly in a repair scenario? And will the technology “optimise design” by allowing components manufactured conventionally in multiple sections to be created in one piece? With the latest machines permitting ever-larger items to be produced and in larger volumes, Boyer predicts a “bright future” for additive manufacturing: “It’s just finding those right applications.”

BAE Systems has been manufacturing parts for its military programmes for several years using additive FDM techniques on Stratasys printers. “Ultimately our aim is to make metal parts to substitute for those made by forgings or casting,” says Greg Flanagan, additive manufacturing operations lead for BAE’s air business. “Additive manufacturing gives us the freedom to make complex components – and assembly of what would have been five or six parts – in a single piece.” 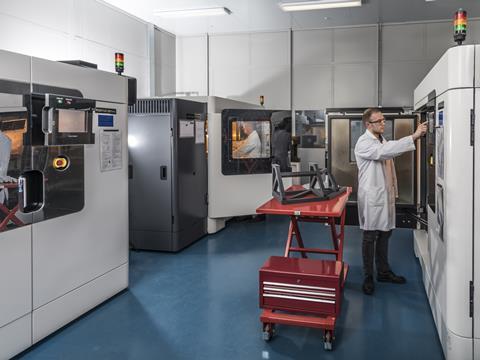 He gives the example of a component on the Eurofighter Typhoon’s radar cooling system, made of nylon, that traditionally comprised 16 elements. “Now we print it in the north-west [of England], next to the aircraft assembly line in just two pieces, and in 24 hours.” Speed and cost are the drivers. “The real challenge with next-generation aircraft is to do things in significantly shorter timescales and more efficiently,” he says. “We’ve integrated a key disruptive technology into our business.”

Another Stratasys user, Senior Aerospace, recently replaced aluminium fixtures on low-pressure air ducts it supplies to a number of regional and business aircraft programmes with additive manufactured versions it prints in-house. Not only has the move reduced the component’s weight, but reduced lead times of up to 16 weeks with suppliers to “a few hours”, says Darren Butterworth, chief executive of Senior Aerospace BWT in Macclesfield, the UK. 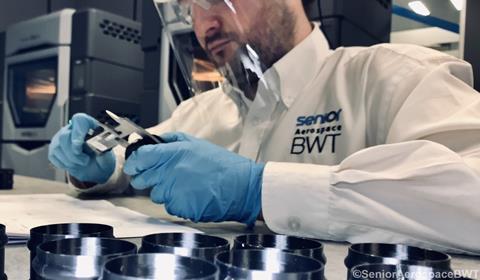 The OEMs are also driving the adoption of additive manufacturing. Boeing has more than 70,000 3D-printed parts flying across its commercial, defence and space platforms, with production on more than 200 machines at 20 sites. The CST-100 Starliner, which will transport crew and cargo to low Earth orbit, contains “several hundred” additive parts, that have reduced “mass, cost and cycle time” on the spacecraft’s interior, says Dr Melissa Orme, vice-president of additive manufacturing.

Boeing has been a “leader” in additive manufacturing for two decades, she claims, with its first metal experience a titanium part on a space vehicle in 2001. In the commercial aviation sphere, its first structural titanium component was a 787 aft galley fitting in 2017. While reducing cost and shortening design times are crucial, Orme notes that additive manufacturing is also a step towards sustainability for the industry, as the process requires less material to be used.

She believes the technology still has its challenges, although “none are insurmountable”. Materials suitable for additive manufacturing are not always commercially available, and the supply chain is small because of the investment needed in machinery “making it difficult for small businesses to enter this space”, she says. However, the biggest obstacle, she believes, is training, with few universities teaching additive techniques, “requiring the incumbent workforce to learn on the job”.

MRO is a crucial growth area for additive manufacturing because it allows original manufacturers or repair specialists under approval to make replacement parts quickly and as single items or in low volumes. “We have seen a tremendous surge of interest from the aftermarket,” notes Scott Sevcik, vice-president of the aerospace business segment at Stratasys. “For us it is the sector that is growing quickest.”

Satair’s Hammerschmidt believes an ageing airliner fleet will open the door to additive manufacturing in MRO. “Aircraft are a long-lasting product and need to be supported for safety reasons, but more and more programmes are going out of production,” he says. “In years to come, it will become harder to source parts, and additive manufacturing will play a key role in both polymers and metals, particularly in those situations where you need one part every five years.”

Back at GE, Gatlin says emerging programmes will have a higher proportion of 3D-printed parts – a third on the company’s Catalyst general aviation engine, for instance. Also, the economics of additive versus conventional casting will improve as equipment grows in size and sophistication. He almost seems surprised at the pace of change. “We started with parts you could hold in your hand,” he says. “Now you have to push them around on a cart. That’s in five to seven years.”