How defence companies rose to the top during pandemic

Further evidence of how far behind the defence aviation market commercial aviation fell during the worst of the Covid-19 crisis comes from the sales totals of the biggest 10 players in each segment.

The largest defence businesses made almost two-and-a-half times the revenues of their commercial counterparts (for companies with activities in both defence and commercial, such as Airbus, Boeing and Leonardo, we have split their total revenues accordingly). 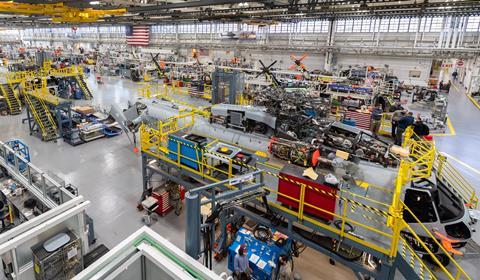 Five of the 10 companies in our list recorded double-digit, or close to double-digit, growth from defence sales in 2020, although Raytheon Technologies’ 43.9% jump is distorted by military revenues from Collins Aerospace and Pratt & Whitney. The merger with United Technologies has added products from military engines to avionics and ejection seats to the Raytheon portfolio.

As it does the main ranking this year, Lockheed Martin tops the league of defence specialists, with sales of just under $65 billion in 2020 – ahead of Raytheon Technologies, pushing traditional number two Northrop Grumman into third. However, Northrop still recorded an impressive 8.7% sales growth for the year.

Others that enjoyed strong growth in 2020 were BAE Systems, in fifth, and 10th-placed Honeywell. The two commercial aviation giants also had disappointing years in terms of expanding their defence activities, with Airbus falling more than 9% from its 2020 total, and Boeing virtually standing still.

In fifth place, and in the Top 10 list of military manufacturers for the first time, Russia’s enlarged Rostec has become an even more powerful entity in the global defence market, although its consolidated revenues fell just over 5% year-on-year.