Leonardo is bolstering the credentials of its M-346 thanks to an international school established with the Italian air force – and the airframer is hoping that further sales of the type will follow soon.

A little over a decade since the first customer example of Leonardo’s M-346 advanced jet trainer was handed over, the type is now in service with six nations, and supporting the instruction of new pilots for multiple other air forces.

Orders to date have come from home nation and launch operator Italy (18), plus export buyers Israel (30), Poland (16), Qatar (6), and Singapore (12). The airframer also has delivered six of its armed fighter attack (FA) variant to an operator that it describes as an “undisclosed customer”. However, online images of M-346FAs in a striking two-tone blue livery identify this user as being Turkmenistan. 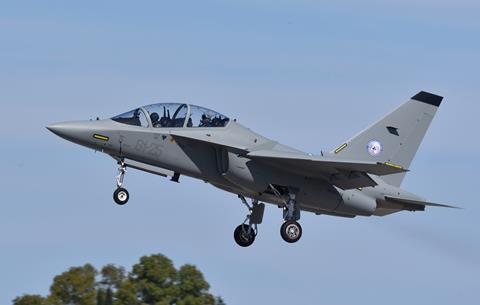 The Italian air force’s first service-designated T-346A made its debut flight on 31 March 2011, and was delivered late the same year, followed by a second example in February 2012.

Meanwhile, Singapore’s lead jet had been rolled out at the company’s Venegono Superiore site in August 2012 and began supporting training activities at Cazaux air base in France the following year, and Poland’s first example from an initial eight-unit order was delivered in November 2016.

Shipments under the low-profile M-346FA deal with Ashgabat commenced in 2021, according to Cirium fleets data, while Qatar’s last of six trainers will be handed over before year-end. 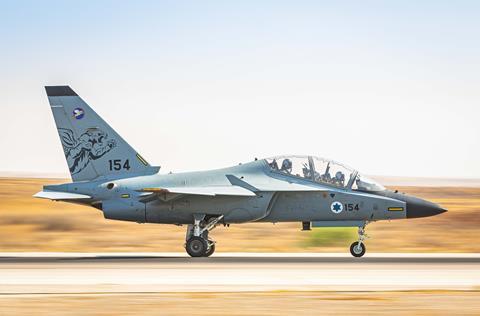 Israel has the largest fleet of M-346s, operating 30 “Lavi” trainers

In what is likely to remain the programme’s most ambitious sales campaign, the company’s US business Leonardo DRS led a bid to produce a T-100 derivative of the Honeywell F124-powered twinjet for the US Air Force (USAF). Offered as a Northrop T-38 replacement via the T-X contest, the model would have been assembled in Tuskegee, Alabama, but the USAF instead selected Boeing’s T-7A Red Hawk in September 2018 for its 351-aircraft requirement.

Leonardo DRS helmed the T-100 campaign after an earlier partnership with Raytheon foundered.

Back in Europe, Leonardo and the Italian air force had used the July 2018 Farnborough air show to launch their International Flight Training School (IFTS) venture, with further support from the nation’s defence ministry and Canada’s CAE.

In addition to furthering the training capabilities of the Italian air force, the initiative also has at its heart a strategy to attract third-party users keen to share access. Launching the IFTS alongside Leonardo chief executive Alessandro Profumo, then-air force chief of staff Lieutenant General Enzo Vecciarelli noted: “I believe that countries in the Gulf, as well as in Africa will also be a new horizon for us.”

The IFTS has been designed to operate with a fleet of 22 M-346s: 18 Italian air force jets, plus four examples supplied by Leonardo. It has been scaled to deliver a total of 8,000 flight hours per year in the Phase IV, or lead-in fighter training category, enabling an annual throughput of 70 students, supported by a 40-strong cadre of military and civilian instructors.

Operations began at Lecce-Galatina air base in southern Italy – home to the air force’s 61st Wing – but are in the process of being transferred a new, purpose-built campus at Decimomannu in Sardinia.

“The IFTS represents an international centre of excellence, with the aim of training military pilots to operate the latest-generation fighters, providing them with the technical and procedural skills necessary for deployment in modern, increasingly complex operational scenarios,” Leonardo says.

In addition to training Italian students, the school also currently provides instruction for others from Germany, Japan, Qatar and Singapore, and Leonardo points to “growing demand for advanced training from partner and allied states”. 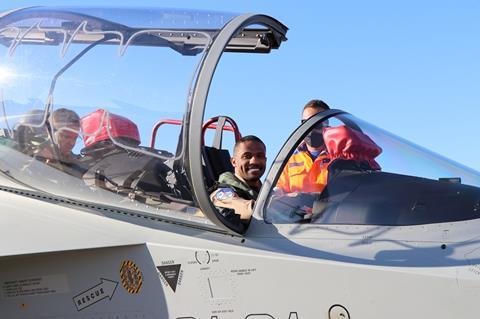 On 18 May 2022, the company announced the graduation of the first pair of IFTS students, with the Luftwaffe pilots having completed a nine-month course at Lecce-Galatina. The school’s first six Qatar Emiri Air Force (QEAF) students subsequently returned to their home nation on 1 June, after completing an almost one-year course at the same site.

“The training course, which began with an initial phase designed to bring the [Qatari] pilots (all with a turboprop background) up to speed with the requirements of the Phase IV programme, covered the standard fighter pilot training syllabus,” Leonardo says.

“This allowed trainees to practice flying in every modern operating scenario, handling the most sophisticated sensors and the various types of mission systems currently in use (both in the air and on the ground),” Leonardo says. Their instruction totalled approximately 150 simulator and live flying sessions.

The QEAF, which employs a fleet of 24 Pilatus PC-21s in the basic training role, is dramatically boosting its capabilities to support acquisitions of a combined 96 Boeing F-15QA, Dassault Rafale DQ/EQ and Eurofighter Typhoon combat aircraft. This has also seen it purchase nine BAE Systems Hawk 167s.

In mid-July, “two additional cohorts of Qatari pilots” began training at Lecce-Galatina, while earlier the same month, a first course was launched at Decimomannu, involving students from Italy, Qatar and Singapore. 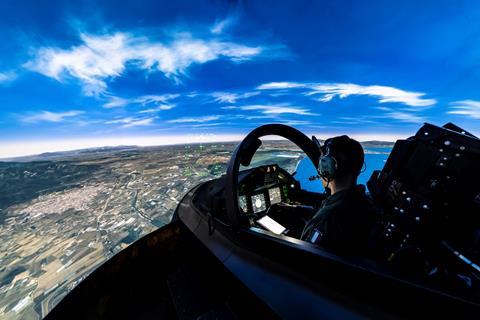 Construction activities at the Decimomannu site will conclude before year-end. “With the building of the new IFTS campus, we are establishing in Italy a true flight training academy,” Leonardo says. The facility also provides access to dedicated live-firing training areas, it notes.

While multinational training activities at the IFTS continue to develop, securing further M-346 orders remains a focus for the airframer. However, a deal to supply Greece with 10 aircraft – brokered by Israel – will see deliveries commence in early 2023, with Athens to phase out its remaining veteran North American T-2 Buckeyes.

Leonardo views multiple other nations as being potential future customers for the M-346, identifying Colombia, Egypt, Nigeria and Peru, along with a possible follow-on need for Poland.

“These markets are and remain countries of significant strategic commercial importance for Leonardo, and we strongly believe that the M-346 and its FA variant can meet all requirements of the air forces mentioned,” the manufacturer says.

However, its near-term hopes of an additional order from Poland were dashed when Warsaw earlier this year opted to buy a fleet of 48 Korea Aerospace Industries (KAI) FA-50PL advanced jet trainer and light-attack aircraft. The type will replace its obsolete RAC MiG-29s and Sukhoi Su-22s in the combat role. 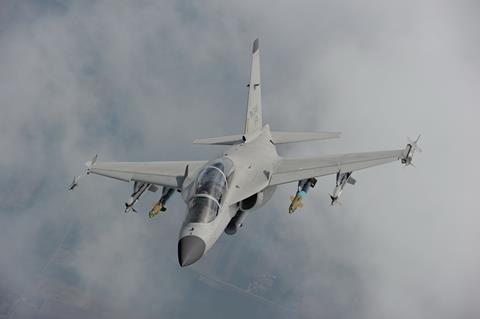 Leonardo has supplied six armed M-346FAs to an undisclosed customer, known to be Turkmenistan

Launched at the Paris air show in June 2017, the Leonardo Grifo radar-equipped M-346FA is suitable for combat, counter-insurgency and aggressor training duties. The variant can be armed with air-to-air and air-to-surface weapons, and targeting or reconnaissance pods, weighing a combined maximum of almost 2,000kg (4,410lb). It also gains a defensive aids system for platform self-protection.

Meanwhile, the company also is furthering the development of its single-engined M-345, and unveiled an armed variant at the Farnborough air show in July.

So far, Leonardo counts the Italian air force as its lone customer for what it describes as the “basic to advanced” trainer. The service has already received its first two examples of the locally-named T-345A, from firm orders for 18. However, it has a stated total requirement for 45 of the Williams International FJ44-powered aircraft to replace its remaining Aermacchi-built MB-339As, including those operated by the Frecce Tricolori aerobatic display team.

“We are working on several international campaigns in Europe, Canada, Africa and Latin America” to further boost the M-345’s sales, Leonardo confirms. 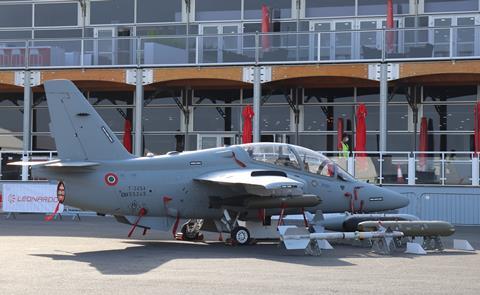 “Leonardo Canada is bringing this company’s world leadership and excellence in the frame of the BLCAT [Babcock Leonardo Canadian Aircrew Training] joint venture, aimed at developing together with its partners an all-Canadian ecosystem in response to the FAcT [Future Aircrew Training] programme requirements,” the company says.

It is also looking at Ottawa’s Future Fighter Lead-In Training programme need, which will replace its NATO Flying Training in Canada-operated Hawk 115s and play a key role in preparing pilots for operations with the Lockheed Martin F-35A; its planned successor for the Boeing F/A-18.

“Both the M-345 and M-346 feature avionics and a human machine interface which is able to match that of latest-generation fighters,” Leonardo notes of the potential to meet Canada’s dual requirements.

It also identifies Slovakia as a potential customer for the M-345, describing its integrated training system as “the best solution to assure highly trained pilots” for the nation, which has 14 Lockheed F-16Vs on order. It is proposing that Slovakia – which also is being offered the Aero Vodochody L-39NG and KAI’s FA-50 – complete its fast-jet pilot training activities by sending students to the IFTS.

In addition to its operational benefits, Leonardo says an M-345 deal with the NATO nation would deliver “a wide industrial return both for the Slovakian defence and civil industry”. Bratislava is already an operator of its C-27J Spartan tactical transport, it notes.