Taking place from 6 to 9 March, the inaugural World Defense Show will shine a spotlight on Saudi Arabia’s impressive air force strength, while its multiple potential procurement opportunities will draw the industry’s leading companies to the tri-service event in Riyadh. 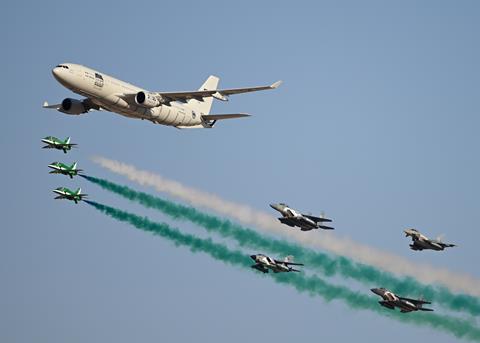 Of the nation’s in-service military aviation assets, 690 are assigned to its air force, with the remainder used by its land forces (80), National Guard (71) and navy (56).

This force mix positioned Saudi Arabia eighth in our latest Top 10 ranking of combat aircraft fleets by nation; some 26 units ahead of next-placed Egypt, and 83 behind Pakistan.

Riyadh’s combined fleet accounts for 20% of all military aircraft in the Middle East region. This rises to 46% of the total 1,951 assets operated by it and the other five Gulf Cooperation Council member states: Bahrain, Kuwait, Oman, Qatar and the United Arab Emirates.

Historical data shows that Saudi Arabia’s air power strength has grown by 65% over the past decade. Our World Air Forces directory for 2011-2012 recorded its in-service fleet as totalling 541 aircraft across its air force (461), land forces (40) and navy (40). 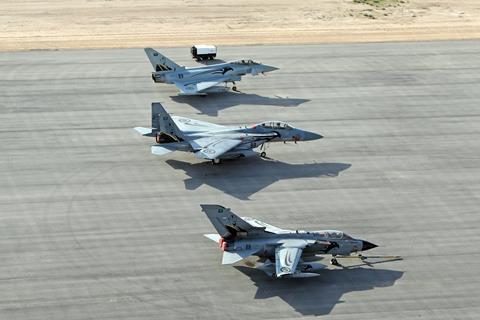 The nation received its last of 84 new-build ‘Saudi Advanced’, or SA-model F-15s in December 2020. “The production ferry flight marks the final deliveries of the Boeing-produced aircraft included in the terms of a $29 billion Foreign Military Sales [FMS] agreement reached in 2010,” the US Air Force Life Cycle Management Center noted at the time.

Seventy of the RSAF’s earlier S-model jets are also being modernised to the enhanced configuration, with the work scheduled for completion by Boeing in 2025.

Boeing in November 2020 secured a $9.8 billion, five-year deal, which the US Department of Defense (DoD) says “provides for modernisation and sustainment… to include such efforts as hardware, software, and interface design, development, integration, test, subsystem and structural component production and installation of future modifications and enhancements to the F-15 Saudi weapon system”.

The company also provides in-country training related to the programme at King Abdulaziz air base in Dhahran, King Faisal air base in Tabuk and King Khalid air base in Khamis Mushayt. 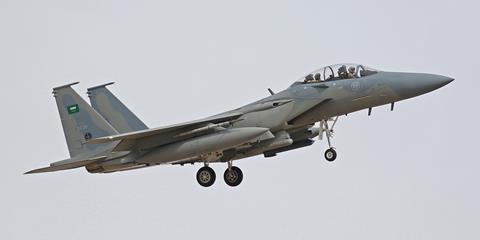 Under a June 2020 contract worth $22.6 million, Boeing also is to deliver new F-15SA aircrew training devices (ATDs) including a full mission trainer, “a visual database for the area of King Khalid air base and five years of contractor logistics support for existing ATDs”, the US DoD says. The work will be completed by April 2024.

Ordered in 2007 as part of the UK/Saudi governments’ Project Salam arms package and delivered in 2009-2017, the RSAF’s Typhoons were assembled by Eurofighter consortium partner BAE Systems.

Riyadh has long been linked with a 48-aircraft follow-on order, with BAE in March 2018 indicating that a deal was potentially near. However, this prospect has since been frustrated by factors including fellow Eurofighter nation Germany’s political opposition to the UK brokering further arms sales to the kingdom, as a result of its combat involvement in the long-running civil war in neighbouring Yemen.

It is unclear whether Berlin’s newly installed coalition government could take a different view, but the four-nation industrial consortium remains active in seeking additional sales to extend Eurofighter production beyond current contracts for Germany, Kuwait and Qatar.

While a follow-on purchase would represent welcome news for Europe’s aerospace industry, the assembly process for any additional Typhoons would be transformed in support of Riyadh’s ambitious Vision 2030 policy. This process involves developing Saudi Arabia’s defence industry, including by establishing in-country production and support capabilities staffed at least 50% from its own population.

BAE has previously transferred final assembly of RSAF Hawk 165 advanced jet trainers to Saudi Arabia, in what the company has previously referred to as an example of “Saudiisation”. A first locally completed example was rolled out at King Abdulaziz air base in 2019, and BAE says six were completed at the site in 2020.

Cirium data indicates that the RSAF’s training fleet modernisation has so far seen it field 32 Hawk 165s, including UK-assembled examples, while another 12 are on order. They have joined its legacy Hawk 65s – 37 of which are still in service, and are aged up to 33 years. These include the distinctive green and white-liveried aircraft used by the Saudi Hawks aerobatic display team.

Looking at the RSAF fleet’s current age mix, there appear to be several near-term procurement opportunities, including a requirement to replace its aged Tornados. Its F-15Cs and 21 F-15D trainers are also of advanced age, having been in use for up to 41 years.

The service has made some recent moves to both acquire new capabilities, and modernise other in-service assets.

In the intelligence, surveillance and reconnaissance (ISR) area, the air force has a growing fleet of special mission-adapted Beechcraft King Air 350s. Six are in use, from a 10-aircraft procurement, while another nine are separately employed as light transports.

However, along with its dozen remaining contracted Hawk 165s and four King Airs, Cirium data records the air force as otherwise having only a trio of Airbus Helicopters H215Ms currently on order – it already flies 13 of the type.

Riyadh recently advanced a $398 million, Phase 2 modernisation activity for its five-strong fleet of Boeing 707-based E-3A airborne warning and control system aircraft. To be performed by Boeing via an FMS contract, the project will support operations with the type until 2040.

Riyadh’s 22-strong in-flight refuelling aircraft fleet ranks it second only to the USA, according to Cirium data – although it lags behind by some 605 units. The RSAF flies six Airbus Defence & Space A330 multirole tanker transports and seven aged KE-3As. Similarly, its pair of modern Lockheed Martin KC-130J tankers are augmented by seven older KC-130H-model Hercules. 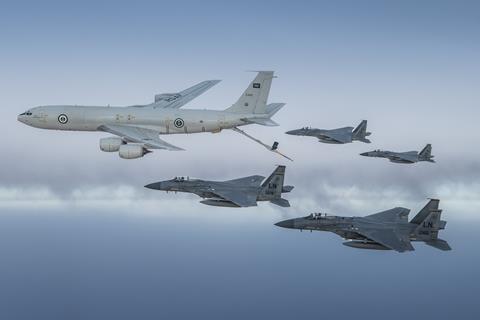 One major procurement need, which has been placed on hold for a number of years, involves the eventual replacement of Saudi Arabia’s large inventory of tactical airlifters. The air force has 33 C-130H transports in use, with its oldest examples aged 48 years.

The US Defense Security Cooperation Agency in November 2012 outlined an estimated $6.7 billion FMS deal under which Riyadh would acquire up to 20 C-130Js and five KC-130Js. But aside from the two J-model tankers now is use, the wider acquisition never materialised.

Any large-scale order would be welcome news for either Lockheed or Airbus Defence & Space, which has previously pitched its A400M Atlas to the nation. But depending on the size of a procurement and required pace of deliveries, a contract could necessitate adjustment to current final assembly rates for the types, which are respectively set at up to 24 C-130Js and nine A400Ms per annum. 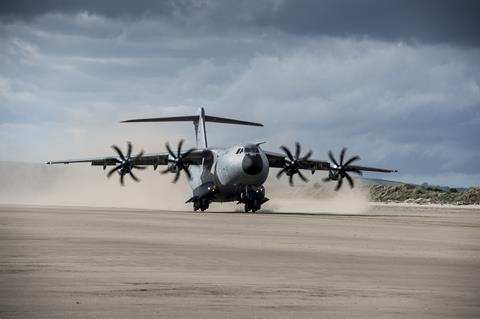 Saudi Arabia has also looked at acquiring new lighter transports, including in 2015 considering a deal for the local assembly of 30 Antonov An-132Ds. A first example of the 8t-capacity airlifter was flown in March 2017, but plans for local assembly via a venture with King Abdulaziz City for Science and Technology and Taqnia Aeronautics have subsequently failed to advance. The RSAF’s fleet includes an assortment of aged light transport assets, including a combined seven British Aerospace Jetstream 31s, Cessna Citation Bravos and Gulfstream Vs.

More than mirroring the air force’s substantial growth over the past decade, several major rotorcraft acquisitions have resulted in a more dramatic increase for the Saudi land forces. Its fleet has doubled within a decade, from 40 to 80 aircraft, to now include 11 Boeing AH-64A/Ds – with 25 E-model Apaches also on order, plus 15 Bell OH-58s and 14 Sikorsky S-70/UH-60M Black Hawk transports.

In what is the nation’s largest current military aircraft procurement, a combined 157 UH-60Ms are being acquired for the land forces and National Guard, Cirium data shows. In March 2021, Sikorsky was awarded a $99.9 million contract modification to supply 25 of the utility helicopters to the National Guard by October 2024.

In May 2017, the US Trump administration outlined a proposed $110 billion defence capabilities package for Saudi Arabia. In addition to a raft of air force and missile defence modernisation activities, this also included proposed border, maritime and coastal security equipment, plus counter-terrorism, cybersecurity and communications upgrades. The pact also included Boeing CH-47F Chinook transport helicopters, with Riyadh subsequently confirming a land forces order for eight, plus options on up to another 40.

Also part of Washington’s 2017 security package were Persistent Threat Detection System aerostats. Last August, Columbia, Maryland-based TCOM was awarded a $217 million contract via the US Army to supply Saudi Arabia with Meter Persistent Surveillance Systems-Tethered equipment, with deliveries due to conclude by March 2027.

TCOM says the systems will perform ISR duties, and also support force protection and communications tasks. It notes that by offering up to 14-day endurance, its lighter-than-air systems “create a unique ability to understand life patterns in areas of interest”.

One growing focus area for Riyadh is in fielding systems to warn against attack by unmanned air vehicles (UAVs) and surface-to-surface missiles.

Targets for such strikes, which have been launched by Iranian-back Houthi rebels in Yemen or – as claimed by Riyadh and the USA – Iranian forces, have included key infrastructure. In a major attack in September 2019, a swarm of explosive-packed drones attacked oil processing facilities in Abqaiq and Khurais, in the east of the country, after evading sophisticated air-defence systems.

Last November, the US DoD approved a Saudi request to buy up to 280 Raytheon AIM-120C AMRAAM air-to-air missiles “to replace inventory used to intercept unmanned air vehicle attacks”. The deal is valued at up to $650 million.

“We have seen an increase in cross-border attacks against Saudi Arabia over the past year,” the US Department of State said. “AIM-120C missiles deployed from Saudi aircraft have been instrumental in intercepting the persistent [UAV] attacks,” it says, adding that hostile actions also place US personnel at risk. 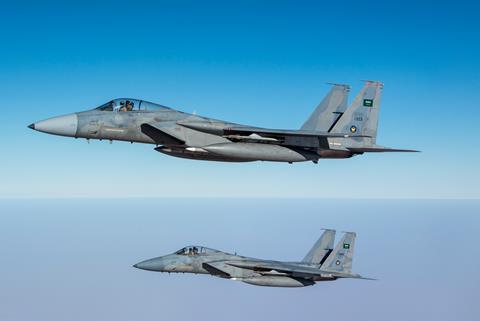 Riyadh is also taking further steps to boost its defensive capabilities in the face of such attacks. Last December, Kratos Unmanned Aerial Systems was awarded a $50.9 million modification to a full-rate production lot three contract for BQM-177A subsonic aerial targets. This exercised an option to boost output by 65 aircraft, of which eight will be supplied to Saudi Arabia.

With its current combat footing, growing defensive needs and bold Vision 2030 industrial ambitions, Saudi Arabia will be putting itself firmly on the global stage during the World Defense Show, with the event already eyeing its second instalment in 2024.