Dassault Aviation’s newest business jet, the Falcon 6X, will, by the end of the year, have made its public debut. Roll-out of the ultra-wide-body twin is due in December, and while there are still at least 12 months of flight testing ahead, it is a sign of sustained progress on the programme.

Since its launch in February 2018, the Falcon 6X has maintained its steady march to a service-entry target of 2022. That is impressive for two reasons: first, the fact that the jet was born out of adversity, namely the cancellation of the Falcon 5X in December 2017; and second, the significant and unplanned impact of the coronavirus pandemic. 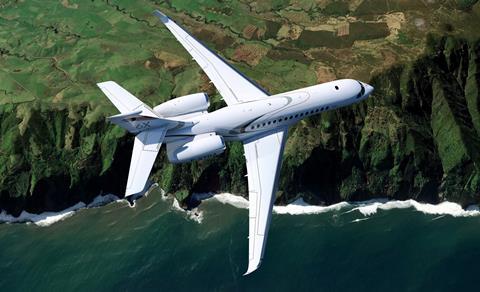 At long-range cruise, nonstop missions like London to Hong Kong or Los Angeles, or Moscow to Singapore are fully within reach

The latter issue in particular had the potential to significantly derail progress on the Falcon 6X. At the turn of the year, the programme was beginning to accelerate and the first pre-production aircraft had just entered final assembly. Then the pandemic hit, virtually shutting down France – and numerous other countries where parts of the jet’s supply chain were located.

Outside of the development, Dassault made continued support for its customers a key priority. But keeping the 6X on track was seen as the other side of that coin; a commitment to its customers to deliver the jet as promised.

Engineering and production departments – as well as suppliers – pulled together to maintain momentum, says the airframer. “We all took pride in this effort. When it rolls out, all our people will consider it a collective success that this aircraft is on the threshold of taking flight.”

While the unforeseen effects of the pandemic came from left-field, the end of the 5X programme was a deliberate decision – but one that needed to be navigated nonetheless.

That aircraft was due to be powered by a pair of Safran Silvercrest engines, but persistent problems with the powerplants caused delay after delay and eventually forced Dassault to axe it.

In its place, the Falcon 6X was launched: conceived as a 5,500nm (10,200km)-range jet with the largest cabin in its class, the aircraft features numerous technological advances designed to bring significant benefits to owners, operators, customers and crews, as befits the airframer’s new flagship. 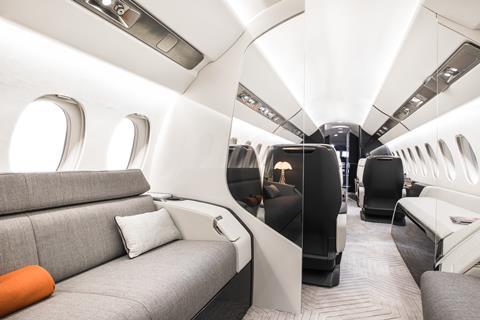 Passengers sit in what Dassault describes as an ‘ergonomic cocoon’

The 6X is powered by a pair of Pratt & Whitney Canada PW812 engines – a variant of the PW800 series already selected by Gulfstream for its G500 and G600.

While the P&WC powerplants are more powerful and heavier than the Silvercrests, requiring some structural redesign to the Dassault-built empennage, they also promise an additional 500nm range over the already impressive 5,000nm planned for the Falcon 5X.

However, it is worth emphasising that the Falcon 6X is not simply a new pair of engines bolted onto an existing airframe design.

Dassault stresses that the jet is not an “evolution” but a “major redesign” of the previous aircraft.

Aside from the structural modifications required by the new engines, the most significant change over the Falcon 5X is an extension of 50cm (20in) to the forward fuselage, contributing to increased cabin volume of 52.2cb m (1,840cb ft), against 50cb m for the 5X.

Dassault boasts that the twinjet “offers the most interior space in the 5,000nm segment and features the highest and widest cross-section of any purpose-built business jet”.

Up to 16 passengers can be accommodated within the cabin, with individual seating in three different lounge areas. In addition, the ultra-wide-cabin credentials are highlighted by the additional 13cm of aisle width available.

The impressive size of the cabin has been put to good use. “Thanks to the extra space available, and based on extensive input from customers, Dassault’s in-house design studio completely rethought and restyled the cabin interior. Their solution features flowing, uninterrupted lines that enhance the feeling of spaciousness,” says the airframer.

The cabin also boasts a hugely impressive 30 windows – two more than planned for the 5X, which itself offered 30% more window area than the venerable 9X (and, if quantity is everything, is more than double the 12, admittedly larger, windows on Gulfstream’s flagship G650). 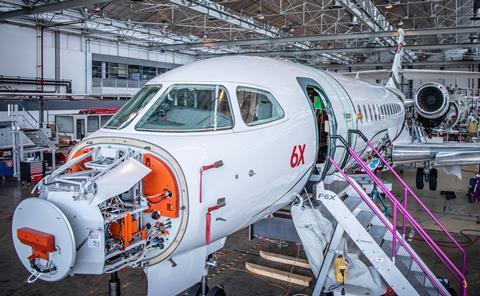 Dassault extended the forward fuselage of the 5X by 50cm, increasing cabin volume

Dassault says it wanted to do something different with the space and compares the experience to “walking into the foyer of your office or the hallway of your home”.

For added comfort, the cabin pressure altitude at 41,000ft will be equivalent to 3,900ft.

As with all modern business aircraft, the cabin features the latest in connectivity – in this case via a Ka-band network. On top of that, passengers can control all the cabin functions via a mobile app or cabin interface. Smart-control mood lighting varies colour patterns in accordance with the type of activity, time of day and season.

Passengers sit in what the manufacturer calls an “ergonomic cocoon”, with all the required electronic functions within easy reach. Recessed controls light up when a hand is near and dim when not in use. Side-panel charging pockets accept personal devices of all types and sizes.

While maximum range is given as 5,500nm, that metric is achieved with eight passengers and three crew. While travelling at its long-range cruise speed of Mach 0.8, the figure is 5,100nm. At long-range cruise, nonstop missions like London to Hong Kong or Los Angeles, or Moscow to Singapore are possible, while at M0.85 nonstop flights from Moscow to New York or Paris to Beijing are within range.

A large part of the Falcon 6X’s efficiency comes from its new-generation wing, which is also another structure that has seen significant redesign over the 5X, with significant weight-saving applied to the internal components. Dassault assembles the wings at its Martignas facility near Bordeaux, adding GKN-supplied control surfaces to its own primary structure.

With a span of 25.9m, the structure is equipped with three slats on the leading edge on each side, and features a curved trailing edge with inboard flap, flaperon and outboard aileron.

While a flaperon is more usually seen on high-speed military aircraft, Dassault has leveraged its experience building the Rafale fighter to translate the control surfaces onto the Falcon 6X – their first appearance on a business jet.

Steep approaches are also aided by their presence; the ailerons can be deflected upwards while the flaperons act as an additional pair of trailing edge flaps. The ailerons and flaperons meanwhile combine to provide roll control. The result is a significant increase in drag with no lift degradation, helping to maintain a low approach speed.

In fact, the approach speed can be as low as 109kt (202km/h) with eight passengers and three crew, and the 6X is able to fly steep approaches of up to 6°, enabling access to airports such as London City, Lugano, and St Tropez. Short-field performance sees the Falcon 6X able to land on runways of just 760m. 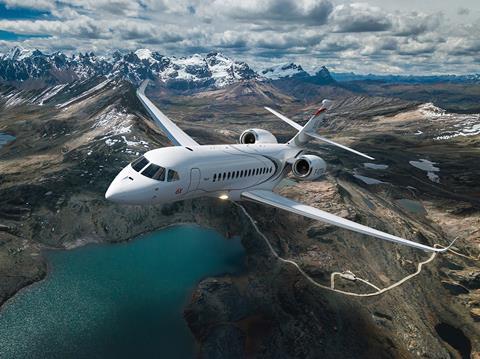 In some senses, though, it is in the cockpit where the biggest advances have been made. Described by Dassault as “the pilot’s new office”, on a basic level the larger fuselage allows for a more spacious cockpit – more headroom than any other aircraft, says Dassault  – alongside 30% more window area. Seats recline to 130° and the wider cockpit allows entry and exit without the need to clamber over the centre console.

Dassault’s FalconSphere II electronic flight bags are integrated into the console. On top of which, there is more storage space for the flightcrew.

While pilots will welcome these changes from a comfort perspective, it is the numerous technological advances that really set the Falcon 6X apart and will make their working lives simpler and, crucially, safer.

Digital flight controls have been present on Dassault business aircraft for over a decade – again aided by the company’s experience in military jets – but the Falcon 6X’s system “represents the next generation of DFCS refinement”, it says, “further simplifying the pilot’s workload for optimised, safer performance.

“Even the streamlined starting sequence for the Falcon 6X is more automated, requiring fewer actions by the pilot other than monitoring the systems as they come on line.”

Accompanying the sophisticated flight controls is the latest iteration of the FalconEye combined vision system (CVS), which was developed in conjunction with Elbit Systems. Already selected by most customers for the 8X, FalconEye will be standard on the new twin.

The CVS blends synthetic terrain images with those from infrared and low-light cameras into a single view on the head-up display. This provides an “unprecedented level of situational awareness to flightcrews in challenging weather conditions and all phases of flight,” says Dassault. “The EVS function will eventually provide operational credits for bad weather approaches with 100ft minima, providing operators with a substantial operational benefit as well.”

The HUD itself has a 30° x 40° field of view and is fed by a six-sensor electro-optical/infrared camera. Images from the camera are combined with three synthetic vision databases that map terrain, obstacles, navigation and airport runway data.

Rounding out the cockpit package is the third-generation EASy III flightdeck, based on Honeywell’s Primus Epic suite. New features include an integrated controller-pilot datalink communication system and RDR 4000 IntuVue 3D colour weather radar that provides predictive lightning and hail detection as well as 60nm-range Doppler turbulence detection. Hazardous weather and the vertical definition of thunderstorms can be seen at distances up to 320nm. 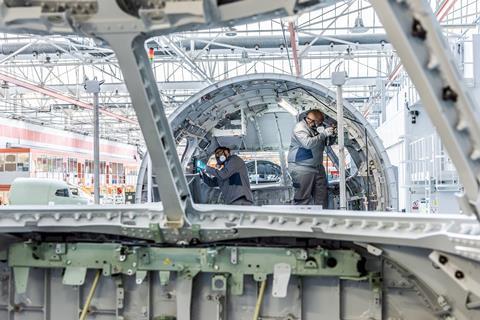 While outside the cockpit, one other safety feature is also worthy of note: a fuel-tank inerting system that uses a blanket of nitrogen gas to stop the fuel igniting – another business aviation first, according to the manufacturer.

Onboard diagnostics have also been improved: a new integrated maintenance system called FalconScan monitors more than 100,000 parameters in real time to provide enhanced visibility for technicians.

Final assembly of the aircraft is performed at Dassault’s Bordeaux-Merignac facility, with the fuselage delivered from the airframer’s plant in Biarritz and the wing from nearby Martignas.

Ahead of the December roll-out, ground testing of the first flight-test aircraft began in July at Bordeaux-Merignac. That means the aircraft remains on track for both its maiden sortie in early 2021 and service entry the following year.

In all, three aircraft will be used for the certification campaign; the second pre-production aircraft is complete and the third recently had its wing and fuselage mated at Bordeaux-Merignac.

The first two of these will be heavily instrumented and capable of performing a full range of aerodynamic, performance and systems testing. However, the third aircraft will be outfitted with a full passenger cabin to evaluate “systems functionality, acoustics, airflow, comfort and other factors”.

Interior furnishings, environmental systems, electronics and other equipment are currently being tested in a ground-test rig prior to installation.

Selection of the PW812D engine was a sign that Dassault was determined not to – and could also not afford to – make any decisions that would delay the development of the Falcon 6X. 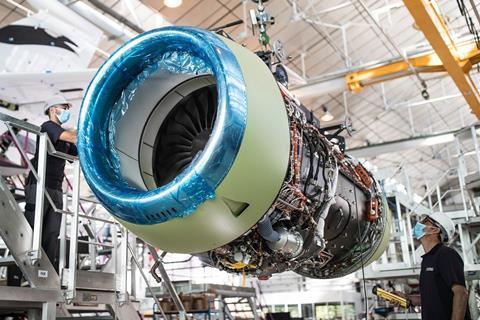 When the aircraft was launched in early 2018 PW800-family powerplants were yet to enter service, although variants had been chosen by Gulfstream to equip its G500 and G600 jets, which duly arrived later that year. All of which provided some level of certainty on the relative maturity of the engine by the 6X’s service entry target of 2022.

On top of this, the engine shares core technology with Pratt & Whitney’s PW1000G-series powerplants for commercial aviation, adding an extra degree of reassurance for operators.

Aside from the out-of-the-box reliability, what the 13,000-14,000lb (59-62kN)-thrust PW812Ds also promise is emissions and fuel burn that offer a claimed double-digit improvement over previous-generation engines, plus a 40% cut in scheduled maintenance.

The PW812D completed an initial airborne test campaign earlier this year aboard P&W’s Boeing 747 flying testbed and a second series of flight tests is currently ongoing.

So far, the engine has logged 200 flight hours and more than 1,600h of ground tests.

A number of initial certification points for the powerplant have also been completed, including bird strike, ice ingestion and blade-off tests.