BAE Systems has signed a contract to supply the Royal Saudi Air Force (RSAF) with a second batch of Hawk 165s in a commitment pushing lifetime orders for the jet trainer through the 1,000-unit barrier.

“The modernisation of the RSAF’s training aircraft fleet has been extended with an agreement for the supply of a further 22 Hawk aircraft, associated ground equipment and training aids,” BAE confirmed in its full-year results statement for 2015, released on 18 February.

Riyadh already had 22 of the new-generation Hawk trainers on order, the lead example of which made its debut flight from BAE’s Warton final assembly site in Lancashire in September 2015. A second example took to the air in mid-November.

“The original contract continues on schedule, with all 22 Hawk aircraft in advanced stages of production,” BAE says. “Deliveries are due to commence in 2016.”

A package of 55 Pilatus PC-21 basic trainers was also included in the company’s earlier modernisation deal with Saudi Arabia. The Swiss manufacturer had handed over 46 of these by the end of 2015, BAE confirms.

The repeat order with Saudi Arabia – which Flightglobal’s Fleets Analyzer database shows as already flying 45 legacy Hawks in the Mk 65 and 65A standards – pushes BAE’s sales total beyond the 999 mark, where it had remained for several years. This total also includes those T-45 Goshawk trainers produced for the US Navy under a partnership agreement with Boeing.

Riyadh’s new deal is believed to include replacements for those trainers currently operated by its Saudi Hawks aerobatic display team, although BAE declines to comment. Adaptations required to prepare part of the new batch for this role would include the integration of a smoke-generation system. 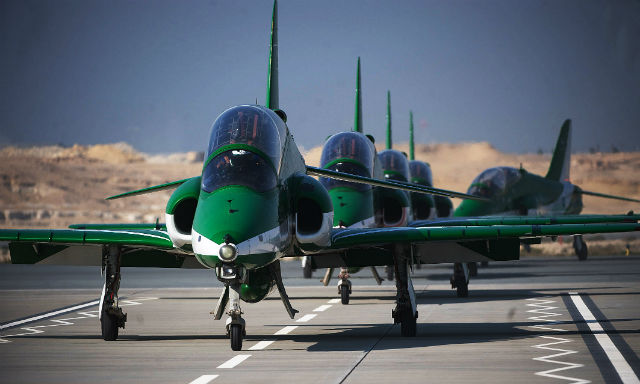 Several further opportunities exist to build on BAE’s Hawk sales total, according to the company. India has previously requested additional examples to those in operation and under contract and BAE says: “An order for a further 20 from the Indian air force is currently being negotiated.” Discussions also continue with its local partner, Hindustan Aeronautics, to further develop the Rolls-Royce Turbomeca Adour-powered type “to meet potential requirements for new capabilities”.

Five Hawk 132s were delivered to the Indian air force and 15 to the nation’s navy from a HAL final assembly line during 2015, BAE says.

Production is also under way in support of an eight-aircraft deal with the Royal Air Force of Oman. Muscat will receive its new Hawks in the Mk 166 standard and the type will prepare pilots for use of its future fleet of Eurofighter Typhoons, the first of which has just entered final assembly at BAE’s Warton facility.