Pilatus has announced a trio of orders for its PC-21 turboprop trainer, with the commitments totalling 21 units.

Worth more than Swfr300 million ($292 million) to the company, the orders will lead to the production of 17 aircraft for the French air force, a further two for previous buyer Jordan and two for the UK company Qinetiq, for use by the Empire Test Pilots’ School (ETPS).

Signed on 30 December 2016 with prime contractor Babcock Mission Critical Services France, the deal with Paris will see the PC-21 “used to train future military pilots who will transfer to the [Dassault] Alpha Jet prior to their conversion on to the Dassault Rafale,” Pilatus says. In addition to producing the aircraft, the Swiss company says it will provide ground-based training material to support the new training system; named FOMEDEC. 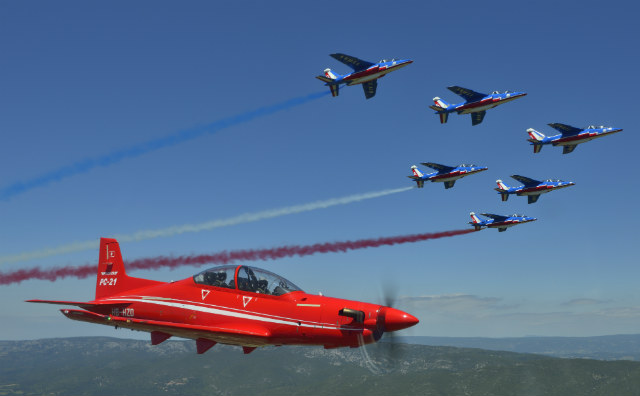 In November Babcock said it was expecting to finalise an 11-year contract with France’s DGA defence procurement agency to supply a new-generation training system, with the deal to value a potential €400 million ($417 million). Also included in the FOMEDEC project are a new training facility to be provided with simulators and mission planning and debriefing equipment, plus the delivery of through-life support for the aircraft fleet.

The previous month, Pilatus chief executive Markus Bucher had said the company was close to finalising a deal with France for 20-25 aircraft, with the PC-21 having been offered by both Babcock and Airbus Defence & Space.

The two PC-21s to be delivered to Qinetiq, equipped with modified instruments for use by the ETPS, will be employed “to train test pilots and flight test engineers for customers from the UK and elsewhere”, Pilatus says.

Late last year Qinetiq received a £1 billion ($1.26 billion) contract from the UK Ministry of Defence to modernise its provision of test and evaluation services at sites including Boscombe Down in Wiltshire. Included in this was £85 million which the private company said would be used to acquire a new aircraft type to replace the Alpha Jets and BAE Systems Hawk T1s now flown within the ETPS fleet.

The remaining two PC-21s from Pilatus’s new batch of contracts will be trainers previously listed as options for the Royal Jordanian Air Force. The acquisition will boost the service’s eventual fleet of the type to 10 units. Deliveries to Amman will start later this year.

Schwenk says the orders boost Pilatus’s total sales of the PC-21 to 209 aircraft. The model is already in operational use with the air forces of Qatar, Saudi Arabia, Singapore, Switzerland and the United Arab Emirates, and Australia has also ordered the type.