The French air force has performed the first operational flight using an A400M tactical transport, employing the type to deliver 22t of supplies in support of the nation’s Operation Serval activity in Mali.

Performed from Orléans air base on 29 December 2013, with the service’s second of an eventual 50 A400Ms, the 6h 40min sortie also involved taking French defence minister Jean-Yves Le Drian to the African state, as part of a tour also involving him visiting Chad and Niger. 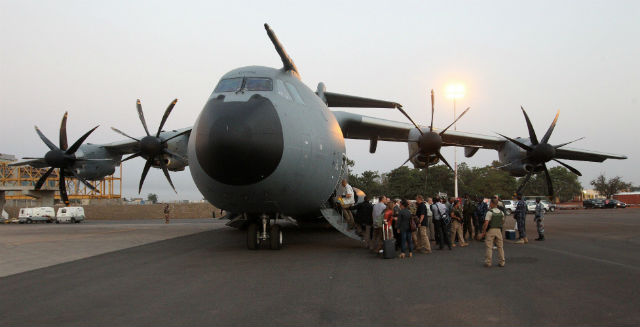 France, which accepted its first A400M on 2 August 2013, conducted the task using its second example, MSN8/F-RBAB. “We carefully planned the flight, in order to overcome all eventualities,” says the mission’s commander, identified by the air force as Lt Col Creuset. This work included using a newly-installed full mission simulator at Orléans to rehearse the deployment.

The A400M’s maximum usable payload capacity of 32t is double that of the Dassault-Breguet C160 Transalls which France’s fleet will replace. Speaking last month at SMi’s Military Airlift conference in Seville, Spain, the French air force’s joint force component commander for the Serval campaign said the new aircraft would have made a significant difference during the early days of the mission, which was launched in January 2013.

Airbus Defence & Space’s then-Airbus Military unit delivered only two of its expected four A400Ms in 2013. Turkey has been in protracted talks about accepting its first of 10 examples since late in the third quarter, while France requested that its third “Atlas” - recently flown for the first time - be held back until early 2014. The airframes are likely to be added to a previous plan to deliver 10 of the aircraft this year, including the first on order for Germany and the UK.