This year marks the tenth anniversary of a transatlantic pact that led to the creation of the C-27J Spartan tactical transport on show in both the static park and daily flying display at Paris. Although Alenia Aeronautica's partnership with Lockheed Martin was discontinued earlier this decade, the Italian company's twin-turboprop design is soon to enter service with its fourth European NATO air force, and is also being tipped to secure its first sales on a further two continents. 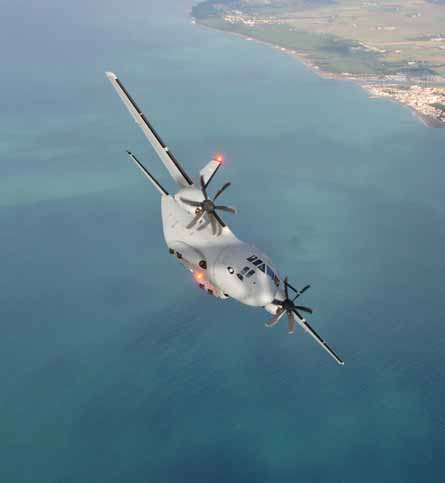 If offers of the C-27J prove successful in competitions in Australia, Canada and the USA, the new transport will have bettered the sales record of the aircraft on which it was based: Alenia's G222, production of which totalled around 120 units. With firm orders for 32 C-27Js already in place from four countries, and a deal for another seven the subject of an ongoing legal challenge in Romania, the prospect of landing contracts for around 175 more is a mouth-watering one for the Finmeccanica company, which is bullish about its chances in all three contests.

Describing its product as "the most advanced new-generation medium tactical airlifter on the market", Alenia is pitched in a fierce battle for supremacy against the Spartan's leading competitor, EADS Casa's C-295. Winning combined deals for around 30 aircraft in Australia and Canada would see the former company edge ahead of its European rival, which has so far booked orders for 54 C-295s from seven nations. But it is in the combined US Air Force/Army Joint Cargo Aircraft competition, which seeks an expected 145 transports, that one of the aircraft will be crowned the dominant force in what is becoming an increasingly important sector for nations unable to afford larger and more expensive aircraft, such as the Airbus Military A400M, Boeing C-17 and Lockheed C-130J (see box p95). A decision on the US contest was set to be announced as Flight International went to press.

It was in 1997 that the then Alenia Aerospazio and Lockheed launched the C-27J project under the LMATTS partnership. The aircraft was designed to pull through technologies already integrated with the US company's C-130J, including its propulsion system and avionics equipment. This meant that the Spartan would be able to operate alongside the "Super Hercules", by delivering personnel and supplies "the last mile" and if necessary, to do so under combat conditions.

With this frontline ethos in mind, the C-27J has been equipped with an integrated defensive aids suite combining radar and laser warning receivers, missile approach warners and chaff and flare dispensers to protect the aircraft from threats such as shoulder-launched surface-to-air missiles. Placed in an operational theatre such as Afghanistan, where all four currently confirmed C-27J buyers have troops deployed, the type could ease the demands on a stretched NATO fleet of C-130s and, crucially, also reduce a reliance on more vulnerable transport helicopters. The Spartan also has an inbuilt ability to withstand battle damage when it is placed in harm's way, with a three-spar wing design incorporated for strength, an optional on-board inert gas generating system to prevent a fuel-air explosion in its fuel tanks, dual redundant control systems and an armoured cockpit floor.

The first prototype C-27J made its flight debut in 1999 and civil and military certification were received during 2001. The first production example to be delivered was handed over to launch export customer Greece in September 2005, with Athens expected to have nine of its 12 aircraft in use by year-end. Launch buyer Italy and Lithuania, meanwhile, accepted their first examples within the last six months, while Bulgaria's first of five will follow during the last quarter of this year.

Alenia also won a contest last December to supply seven aircraft to Romania from late 2008, but this deal is in limbo following a successful appeal by EADS Casa. This led to the abandonment of final contract negotiations earlier this year after a Romanian review body criticised a lack of transparency during the selection process, but Alenia is now awaiting an appeal hearing in a bid to revive the sale.

The Spartan offers its customers the flexibility to perform transport tasks carrying up to 62 combat troops or 46 paratroopers, or to conduct medical evacuations carrying up to 36 stretchers and six attendants. However, it is in the logistics transport role that the aircraft will see greatest use. The 17,500kg (38,600lb) empty weight C-27J has a maximum payload capacity of more than 11,400kg and can carry three and a half NATO-standard 463L pallets inside its 3.33m (10.9ft)-wide and 2.6m-high cargo compartment.

Cargo handling commonality with the C-130 is one of the C-27J's strongest marketing points, and the type's ability to accommodate pallets loaded at up to 5,000kg promises a rapid transfer of loads between the aircraft. It is also capable of transporting two armoured light vehicles or a partially disassembled light helicopter, such as a Bell OH-58 Kiowa, loaded via the aircraft's rear cargo ramp using on-board winches. To ease this process, the C-27J is also capable of raising its nose by 4.3°, and its cargo floor can also be raised by 0.5m.

Coupled with its cargo capacity of more than half that of the C-130J, the smaller aircraft's shared use of Rolls-Royce AE2100-D2 engines - each generating 4,630shp (3,450kW) - and 4.11m-diameter six-blade Dowty R-391 propellers also gives its in an enviable short take-off and landing capability. The aircraft can be airborne within 335m, and within 580m from an unpaved strip at MTOW in tactical use. Its landing run is also around 335m at maximum landing weight of 30t. If a landing strip is not available, the C-27J can also be used for the aerial delivery of up to 9t of equipment, including the use of low-altitude parachute extraction system delivery equipment. For unsupported operations, the aircraft also benefits from the integration of a Hamilton Sundstrand auxiliary power unit, producing 50-60kVA. 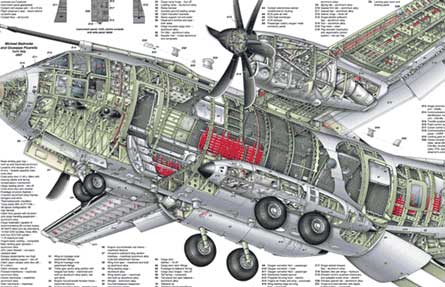 The C-27J will from later this year gain clearance to extend its operating endurance through in-flight refuelling. This advance will be introduced with the Greek air force's ninth aircraft, with customer acceptance work to start next month. Athens' remaining three examples will be delivered in the advanced standard during 2008, while it has until the end of this year to decide whether to exercise an option for another three.

Currently the only nation to operate the C-27J as intended alongside the C-130J, Italy has accepted its first three of 12 aircraft at Pisa airbase since January, and its operational fleet will be trebled before year-end. Last deliveries of the G222 replacement will be made to the domestic customer next year. Lithuania's remaining two aircraft will be delivered in 2008 and 2009 respectively, with the aircraft to replace Antonov An-26s.

Alenia's aircraft has a higher speed, greater range and increased payload capacity than the smaller C-295, with the C-27J also having the edge in speed terms, with a maximum cruise of 315-325kt (580-600km/h). The aircraft can fly at up to 30,000ft and manoeuvre at up to 3g if required, and its handling characteristics also provide a low stall speed of 80-90kt. Operations are managed by two pilots using a Honeywell-supplied avionics suite that includes twin head-up displays and five 6 x 8in (180 x 205mm) multifunction displays showing flight information including a digital moving map. The crew typically also includes one loadmaster.

As well as being more economical to run than the previous generation of medium tactical transports such as its originator, the G222, the C-27J is also attractive in terms of its acquisition costs. Lithuania's contract for three aircraft is worth €75 million ($100 million), while Alenia cites rival prices of around $90 million for the C-130J and €100 million for the A400M.

And although the C-27J is larger than the C-295, the Italian company says its winning bid in Romania was priced more than €40 million below the eliminated system. Buyers will also benefit through the availability of an on-board health and usage monitoring system that will enable them to perform on-condition maintenance, although major checks are currently recommended at intervals of every 1,500 flight hours or two years.

Alenia and its partners - past and present - have achieved much over the last decade in developing the C-27J to an operational level. But it is only now that the aircraft is being placed in the hands of air force users across Europe that it could really be poised to take off.