Gripen E on target for debut flight in second quarter

Saab’s Gripen E remains on course to make its flight debut during the second quarter of this year, as the Swedish manufacturer steps up its sales efforts for the new-generation fighter and its earlier C/D-standard variant.

Confirming that lead prototype aircraft 39-8 will get airborne before the end of the second quarter, head of Gripen Jerker Ahlqvist says: “So far, everything is going according to plan, and it looks really promising.” Deliveries of the GE Aviation F414-powered jet will start in 2019 for the Swedish air force, followed by aircraft for export customer Brazil. 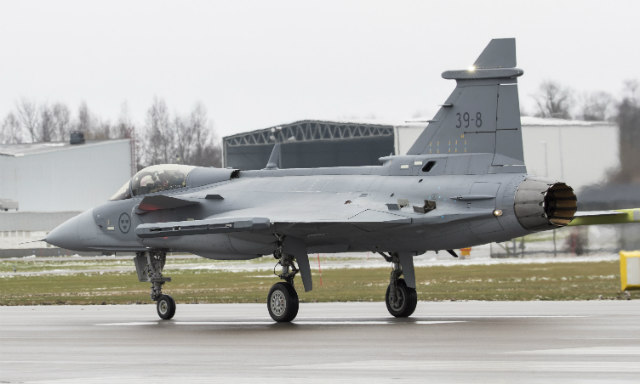 Low-speed taxi tests with the Gripen E commenced at Saab’s Linköping production site late last year, and Ahlqvist says the company is currently validating its software in preparation for the first flight. Aircraft 39-8 is currently in ground test, while the second of its eventual three prototypes has entered final assembly.

Ahlqvist notes that Saab’s decision to use an app-type software architecture on the Gripen E is already proving successful. “We see that corrections to the software that we need to do go very quickly,” he says. “We can make a change and then introduce a new software load into the aircraft within days – something that previously could take weeks or even months. That gives us confidence that the programme will meet its schedule and milestones.”

Richard Smith, head of Gripen marketing and sales, says Saab is increasing its efforts to add to the number of customers for the type, in both its C/D and E/F standards. Discussions continue with Botswana and Slovakia over their potential acquisition plans, and the company has just submitted its response to a Bulgarian request for proposals. It has also provided early information to India linked to a potential requirement for 150 single-engined fighters, and is eyeing a navy requirement in the same country for its proposed aircraft carrier-capable Gripen Maritime model.

“The market looks optimistic,” says Smith. “We really need to bring in as many prospects as possible, in order to close our target, which is a contract every year.” The company currently has no orders for the C/D variant, but has previously said it could deliver examples within 18 months of securing a production contract.

Also referring to potential opportunities for the Gripen in Belgium, Canada, Colombia, Finland, Indonesia, Malaysia and Switzerland, Smith says: “We’re in a very good position right now, having both platforms.”

Meanwhile, Saab has begun updating the Czech Republic’s Gripen C/Ds with the type’s latest MS20-standard software, which entered operational use in Sweden last year. Hungary has also contracted the company to make the same modification to its fleet, and Ahlqvist says it is also in early dialogue with South Africa and Thailand about a similar update.