Grob Aircraft has delivered half of the 20 new turboprop trainers ordered by the Myanmar air force, as it also moves past handing over its 50th example of the G120TP.

The German manufacturer has so far supplied four customers with a combined 51 G120TPs, according to an update provided to Flightglobal. These also include Argentina and Indonesia, which have received their full orders of 10 and 18 aircraft respectively, and Mexico, which has accepted 13 from an eventual 25. Deliveries to the latter’s air force commenced in February 2015.

Aircraft produced for Mexico and Myanmar are being equipped with a full digital cockpit, while analogue systems feature in those delivered to the other current users.

In June, CAE USA also announced plans to buy six of the tandem-seat type to support its delivery of initial and recurrent fixed-wing pilot training services to the US Army and US Air Force. The aircraft will be operated from an airport near Fort Rucker in Alabama under the arrangement, with Grob also to provide associated ground-based training equipment.

Noting that the G120TP has a performance envelope which enables manoeuvres of up to 6g to be flown, Grob says: “the potential to conduct upset recovery training was a very important criteria for the selection”. 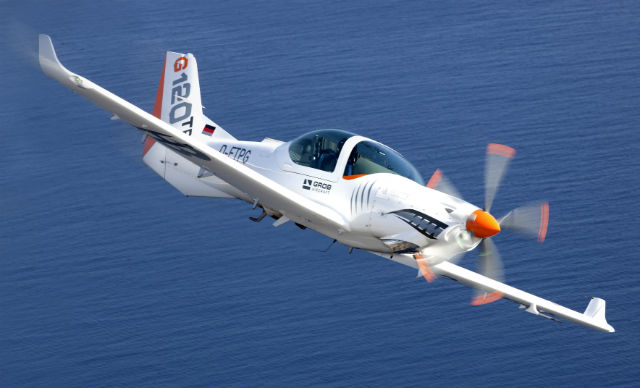 Meanwhile, a contract award is anticipated later this year via the Elbit Systems/KBR joint venture Affinity, to provide 23 G120TPs to deliver the elementary flying training as part of the UK Military Flying Training System (MFTS). Once fielded as replacements for the nation’s current Grob G115 Tutors, these will be operated from the Royal Air Force’s Barkston Heath and Cranwell bases in Lincolnshire.

Confirmation of the MFTS deal will boost Grob Aircraft’s total orders for the G120TP to 102 units for six operators. The type will be on static display at the Royal International Air Tattoo at RAF Fairford in Gloucestershire during 17-19 July.