Hawaiian Airlines has signed a letter of intent to purchase 10 Boeing 787-9s, and it has cancelled its order for six Airbus A330-800s, the company says.

The news marks a major fleet shift by Hawaiian, but one that had been widely anticipated by industry observers.

The deal with Boeing, which Hawaiian describes as "non-binding", also gives the carrier the option to buy another 10 787-9s, it says.

Hawaiian cancelled its order for six A330-800s on 27 February, the company confirms.

The A330neo family, in which the -800 is the smaller member, is only available with Rolls-Royce Trent 7000 engines. Although the 787 is offered with R-R Trent engines, Hawaiian has selected the General Electric GEnx to power its 787-9s. The airline expects to take delivery of its first aircraft in the first quarter of 2021.

"The Dreamliner’s excellent fuel efficiency makes the 787-9 an ideal choice for Hawaiian’s long-haul Asia/Pacific and North America routes," says Hawaiian. "The company selected the 787-9 as part of a competitive bid process that also included the Airbus A330-900." 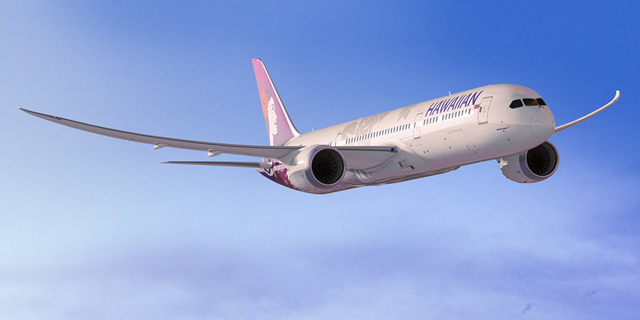 "The Dreamliner combines excellent comfort for our guests with fantastic operational performance and will allow us to continue modernising our fleet into the next decade,” says Hawaiian chief executive Peter Ingram. “It has more seating capacity than Hawaiian’s current widebody fleet, which will allow us to further build upon our successful growth in Asia.”

Hawaiian expects to finalise the purchase agreements with Boeing and GE in the second quarter of this year.