Boeing has celebrated the 500th delivery of an AH-64E Apache attack helicopter, as it eyes opportunities for additional international sales.

Terry Jamison, director of international vertical lift sales for Boeing, says that since AH-64A production commenced in the 1980s there have been 2,485 total deliveries. The type has garnered 16 customers, with 10 countries having “high interest” in potentially obtaining the platform. 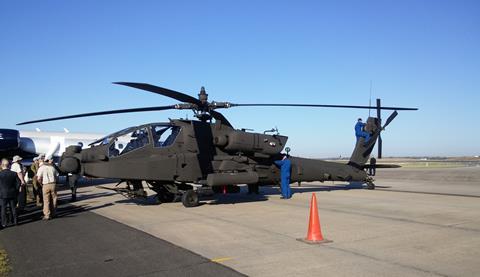 In 2017, Boeing chartered an Antonov An-124 to transport an AH-64E to Australia’s Avalon air show

Jamison made the remarks during a 16 April media call timed for Australia’s east coast. That reflects Boeing’s ambitions to sell the AH-64E to Canberra as it eyes replacement of its Airbus Helicopters Tiger fleet.

Citing customer sensitivities, Jamison declines to name the recipient of the 500th AH-64E, but says that altogether, 501 examples have now been delivered.

Jamison, a veteran of the US Army, outlines several features that he believes sets the Apache apart.

The first is the capability to use its mast-mounted Lockheed Martin/Northrop Grumman Longbow fire-control radar to detect, identify, and attack targets that are not in line of sight. The helicopter can hide behind a hill or other obstacle, pop up to enable its radar to perform a quick scan, and drop back down again. The Apache can detect and classify up to 256 targets, and then offload this data to other units, allowing them to engage the threats.

“This is essential when you’re going against an integrated defence network on the battlefield,” Jamison says. “Because their defence network can’t get line of sight on you, this greatly increases your survivability against that system. Although we’ve seen it do great things in the counter-insurgency role, it was originally designed to fight high-intensity, sophisticated threats.”

Also, he says the helicopter’s ability to operate away from big, fixed bases means it is likely to survive the first 48h of a conflict.

In addition to Australia, several countries in Southeast Asia have an interest in updating their attack helicopter fleets. There is potential business in Japan and South Korea, and elsewhere in the region, with Bangladesh having expressed interest in the type.

Jamison adds that the Apache is well suited to operating in littoral environments. “A lot of people will talk about maritime capability as corrosion prevention only. Yes, that is a key part of it, but there’s also the lethality piece.”

He points out that the AH-64E’s fire-control radar has a built-in capability to detect and classify vessels at sea.

Boeing delivered its first E-model Apache to the US Army in 2011, and continues to build new examples and remanufacture earlier AH-64Ds to the new standard for the service. 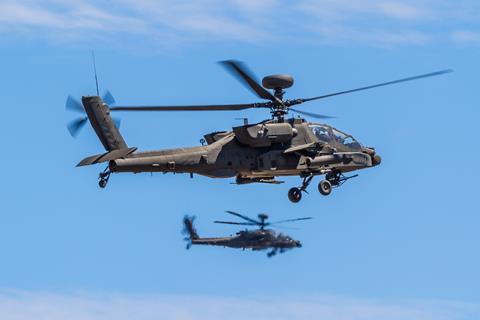 Updated to reflect that the Longbow radar is produced by a joint venture of Lockheed Martin and Northrop Grumman.